One of the greatest UFO sightings in Australian history happened at a school in Westall in 1966. While the children were outside playing either for P.E or recess one of the children saw something very strange flying in the sky’s above. And while this kid was just staring at this flying object he realized that this was a UFO. Then he yelled out to his classmates look, look it’s a flying saucer. And all the kids looked up and they too saw this craft. And this craft really scared them and some of them even started to scream. Then most of them ran as fast as they could back inside the school. And these kids later stated when they got older that it was indeed a flying saucer as it was a round silver disc that was flying quite low and at times very fast over the school. And the teachers heard and saw all these kids just going nuts. So they went to go see what the heck was going on and they too confirmed that there was a UFO, an unidentified flying object flying above their location. Then this craft started to head towards a nearby pasture known as the grange. And some of the more braver students went to go follow it. Then they saw this UFO land. So one of the students a young girl by the name of Tanya walked up and touched it. And right after she touched it she passed out. And the other kids were extremely frightened by this so they ran back to the school. And not to long after this these the students and teachers saw 5 airplanes flying right above them. Then this flying saucer took off at amazing speed from the nearby pasture. It was as if these planes were trying to follow this UFO and it also seemed that these airplanes were military. 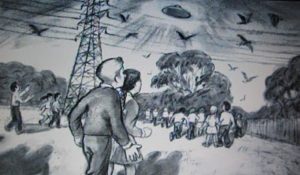 Now it wasn’t just the students and teachers that had seen this craft, it is estimated that more than 400 people in total that lived within this area had also seen it. And some of the students remember seeing an ambulance in the pasture where Tanya had passed out. And according to some of the articles I read this young girl was never seen again. Then a couple of hours later some very mysterious looking government officials showed up at the school and they told these children and teachers to never to speak about what it was that they had seen. And at about the exact same time some of school faculty saw what they believed to be more government employees taking soil samples and pictures over at the pasture where this UFO had landed. Then before the children were allowed to go home a school assembly was called and the principle told these kids that what they had just seen wasn’t real, it didn’t happen and there was no need to discuss it further. Which is a very odd thing to say making many believe that the Australian government must have threatened the principle.

But despite all these threats these children, teachers and some of the townsfolk did come forward. And soon journalist caught wind of this amazing sighting and they started to head towards this town in droves. And when the journalist were interviewing some of these eye witness the police showed up and ordered them to leave. But by that time there was already enough information leaked and pretty soon all of Australia and the world knew about this mass UFO sighting. Now some believe that this was a weather balloon, as according to a local newspaper a weather balloon was launched that morning. But all these eye witnesses swear that what they had seen on that day was not a weather balloon, they truly believe that It was some sort of highly advanced craft. And many doubt that this was some sort of top secret military air craft as why would they fly it right over a school at low altitude and land close by. That just makes no sense so many believe that this was extraterrestrial in origin. Making this one of the most credible mass UFO sightings in History.

Now this case is very similar to another mass sighting that happened in Zimbabwe, Africa in 1995. And I have covered this case before but for those that have not heard about it I will briefly cover it again. On the morning of September 16, 1994 62 school children claimed that while they were enjoying their recess they saw dozens of UFO’s flying above them. And these students just stopped what they were doing and starred in awe at these objects. Then one of these UFO’s landed in a field right next to them. And these kids came face to face with 2 small grey alien beings with huge eyes and very thin necks. And these aliens told these kids telepathically that we needed to take better care of our planet, then they left. Then this kids ran back to the school and told all the adults about what they and just seen and encountered and they were just going crazy.

Now not one adult had seen these UFO’s so they thought that these kids were just making this all up. So the principle came up with a plan to call each child in one by one and ask them what they had seen and also to draw a picture of what they saw. And the principle was hopping to find some major flaws within their stories. And also hopping that one of them would crack and say that they were making this all up. But not one of these students did they said that what they saw was real and there were no flaws in any of their stories and also their pictures were all extremely similar. Now 62 students said that they had seen these UFO’s and these 2 alien beings so if they were making this up you would imagine that at least one of them would crack and come forward. And this was 20 plus years ago and still to this very day their story has never changed. So there is just no way that these eye witnesses are making this up. So there is really only 2 options, what they had seen was real or someone was hoaxing them. Which is extremely unlikely as I don’t even think that Hollywood would be able to pull something like this off and of course be able to talk to them telepathically. Making this another extreme credible UFO and alien sighting.