Bernardo de Galvez was born in 1746, he was a very powerful Spanish military leader who aided the American colonies during the Revolutionary War. In the early 1900’s the city of Galveston opened an amazing hotel and named it after Bernardo De Galvez. And you can’t name a hotel after someone if you don’t have a huge portrait of them on display within the hotel. 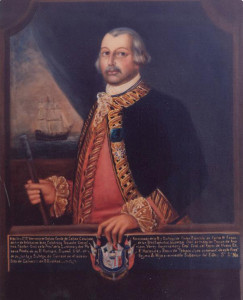 You can find this magnificent portrait of Bernardo De Galvez at the end of the downstairs hallway. Ever since the hotel opened guests would complain about this portrait. The guest would say when walking past the painting the eyes won’t stop following them, making the guests get a little creeped out.

Some even thought it was the hotel playing a trick on them. There are also a lot of reports of people feeling very cold and un easy if standing to close to the painting for an extended
period of time.

But since this hotel is built in honor of the great Bernardo De Galvez they will not remove the portrait. Over the years the hotel and the painting started to get a reputation. The guests love the hotel but they make sure to keep clear of the painting.

Eventually people started to realize that when you take a picture of the painting it is always out of focus, or some unknown mist’s get’s in the way. One day a guests of the hotel asked Bernardo’s portrait very politely if he or she could take a picture. Once they got the pictures back they were shocked as the picture was perfectly clear.

This really set the paranormal world buzzing and made the portrait of Bernardo De Galvez even more famous. Everyday there are hundreds of guests asking the portrait if they can take its picture. And for the ones that don’t ask permission they will never get a clear picture.

The Bernardo De Galvez portrait is indeed a very fascinating haunted object, and it reminds me of Robert the doll. Robert the doll also demands to be asked permission first before taking his photo, or he will put a curse on you.