I love when my awesome subscribers tell me about awesome mysteries like this. All though I have heard about this one before but I would like to thank Naz for bringing this one back to my attention. In 1885 coal miners in a small city of Missouri were mining a shaft deep within the earth. When all a sudden they broke into a huge underground cavern. And the very shocked and curious miners decided to go take a look even tho they knew that it could be very dangerous. And what they found inside should have changed our history forever. That is of course if the reports are true. And there are multiple sources. 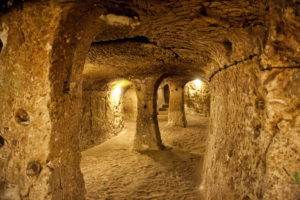 Now what they found inside was basically a huge wonderful buried city. It was said to have incredible masonry, tons of artifacts, stone benches all over the place, metal statues, a stone fountain that flowed with pure clean water that even had a hint of lime in it. And lying beside this marvelous fountain were portions of a giant human skeleton that was 3 times the size of a regular human. Now the miners also said that this extremely tall human being had amazing muscular power and quickness. So maybe it wasn’t even a full skeleton or else how would they come to that conclusion, or i guess maybe they just assumed that giving its size. And one newspaper did report that the femur that these miners brought back with them measured to be four in a half feet long. A normal human femur is about one in a half feet long. So this human or human like being was indeed incredible huge.

These miners also stated that this city was arched in by hard and thick stratum lava. And it also had a huge hall and an underground road system. Now the search party spent about 12 hours in the depths of this amazing, mind-blowing city but they had to turn back because the oil in their lamps was getting dangerously low. And there was still so much more to explore. But they took back what they could and then told the world about this life changing discovery. And many newspapers did report on this including the New York times.

And the New York times did say that there was going to be another expedition within a day or two. But there was never another expedition, at least not a public one. And it appears that this amazing discovery was very quickly being covered up. Even the author of this article stated that it was very hard to find any information about this case. But in the end he was able to find 8 articles on this subject by searching for “Stratum Of Lava” and the time period. But if he searched for common sense terms like a “Missouri Giant Found” or “Missouri Underground City Found” nothing would show up in the library of congresses website. Which indicates clearly that something very odd is going on here. As every article that reported on this story had headlines like “Underground City Found In Missouri” or “A Giant Was Found In An Ancient Underground City” but if you search for those terms nothing comes up. Which is very interesting indeed.

Another thing that’s mind-blowing about this discovery is that this city was found very deep within the earth, under a lot of coal indicating that this city must have been made at least 300 million years ago. As coal is said to have formed anywhere from 290 to 350 million years ago. And it’s the age of this, and discoveries like these is why many people believe someone or “they” are trying to cover this up because it simply goes against evolution. We are taught in school that human beings appeared on earth in Africa around 300,000 to 400,000 thousand years ago. And discoveries like this if true clearly prove that to be wrong. That is of course If we are assuming that these people who built these ancient cities are in fact us, Homo Sapiens.

Now a lot of Native American tribes say that their ancestors were once members of a clan that lived deep within our earth. And the Native Americans are not the only ones who say this as there are legends coming from tribes throughout the entire globe who say the exact same thing. So maybe our ancestors knew a heck of a lot more about our past then we do today. And I have covered another case just like this involving another ancient underground city in Ecuador. And according to the eye witnesses this underground city in Ecuador is almost identical to what these miners described in Missouri. Very fascinating indeed! And I would highly recommended to go check out that video next.