In 1974 the Betz family were inspecting the aftermath of a brush fire that had just recently raged across their newly acquired 88 acre land in Fort George Island Florida. And while the family were assessing the damage they stumbled upon a highly polished metal orb. At first they wondered if this orb was from NASA or maybe even a Russian satellite and they also wondered if this sphere was the cause of the fire as a result from it falling from the sky and crashing onto their property. But after searching they saw no signs of a crater and the orb showed no signs of any damage whatsoever. So then they figured that it must be an old cannon ball, all though it did appear to be in near perfect condition. Now the family thought that it was a very neat find but at that time they really didn’t think that it was anything special so their 21 year old son Terry Matthew Betz decided to keep this orb in his room on the window seat. And a couple of weeks later Terry had some friends over and they were playing with a guitar when all a sudden the orb started to move on its own and it started to display some very strange behavior and it was also humming. Now Terry was amazed so he showed his family and they too were also amazed, in fact they were speechless as they just couldn’t believe what they were witnessing. Then they started to do all sorts of experiments and they believed that this orb was also producing high frequency waves as their female poodle would whimper when she got close to the orb and she would try to use her paws to cover her ears. 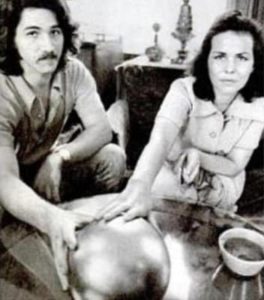 And when the Betz family rolled the orb across the floor the orb would stop all by itself, then it would vibrate, change direction then return to the person who rolled it. If they rolled the orb on a table it would move but it would change direction right before falling over the edge. And it also seemed to be more responsive when it was a nice sunny day opposed to a dark and rainy one. So it seemed that this orb was somehow solar powered and its as if something inside was able to control it, like it had its own guidance system. And the Betz family were actually afraid that it would leave the house on its own. So when no one was playing with it or watching it they would place the orb in a sealed bag so it couldn’t escape. Now the Betz family wanted answers so they contacted the Jacksonville Journal and the Jacksonville Journal were very intrigued by their story so they sent out a photographer to take a few pictures of the orb and to see if this was the real deal. And the first thing the Betz family told the photographer to do was to roll the orb across the floor.

And at first he was skeptical but he was blown away by what he saw, in his own words. “They told me to put the orb the floor and give it a push. It rolled a ways and stopped. Then It turned by itself then rolled about four feet. It stopped. Then it turned again and rolled to the left about eight feet, made a big arc and came right back to my feet.” And after this the photographer examined and played with the orb for a little bit he then called his boss and he told him that this orb was very special indeed and the Jacksonville Journal wasted no time, they wrote an article about this strange orb and they called it the mysterious sphere. And not to long after this articles was published everybody wanted to see this orb, including the New York Times, the United States military, and even NASA. And the Army sent out an investigator to examine this sphere and he stated that the orb did behave very strangely. Now the Betz family were getting bombarded by scientist asking them if they could send the sphere to their research facility so they could examine it, but the Betz family was warned not to do this as they would probably never see it again, so they declined.

But things started to get a little weird and scary as the Betz family claimed that at night they could hear organs playing even though they didn’t have an organ in their home. And all throughout the day doors would violently slam all by themselves. So they decided that it was finally time to get to the bottom of this so they sent the orb to scientists who were posted at the Jacksonville Naval Air Station. And these scientist said that the orb possessed 2 round objects inside and it also had 4 magnetic poles. Now they were very shocked by this so they asked the Betz family if they could drill holes inside the sphere. But the Betz family didn’t want them to do that for fear of damaging the orb and since the scientist concluded that this orb was not a product of the United States military or NASA, etc.. they gave the it back. Then the Betz let another scientist Dr. Willson examine the orb and he stated that there were in fact radio waves coming from inside the sphere and it was surrounded by a magnetic field. He also stated that the orb did have multiple magnetic poles inside just as the navy said and according to Dr. Willson this defied all known laws of physics. Now the navy told the Betz family that the orb was made out of stainless steel but Dr. Willson said that it contained an unknown element making it slightly different from steel. And Dr. Willson believed that it was possible that this sphere was made by an intelligent unknown life form, extraterrestrials. But the navy disagreed with that statement.

Then a Dr. James Albert Harder examined the sphere and his examination and conclusion sent everybody into a panic as he said that this orb was an extraterrestrial doomsday device. Dr. Harder believed based on his X-ray studies that the two internal spheres are made of elements far heavier than anything known to science. While the heaviest element yet produced in any atomic reactor here on Earth has an atomic number of 105, and the heaviest element occurring naturally on Earth is uranium, with an atomic number of 92. Harder claims to have determined that the Betz sphere has atomic numbers higher than 140. If one were to drill into the sphere, he asserted, ‘perhaps the masses would go critical’ and explode like an atomic bomb. So it’s a good thing the Betz family didn’t let the navy drill holes into the orb. And he also said that people should stay as far away from this orb as possible.

Then right after Dr. Harder’s statement about the sphere the Betz family and the orb just disappeared. There were no more articles, no more examinations, just nothing. It was like they vanished into a black hole and people started to believe that after Dr. Harder’s conclusion the military got involved. Now still to this very day 40 plus years later a lot of people are wondering what the heck happened, how could the Betz family and the sphere just disappear like that, this was a very popular story, the media couldn’t get enough of it. And there are still so many unanswered questions was the orb made by extraterrestrials, was it really a doomsday device, or was it just a very cleaver hoax. And sadly I guess we will never know. But over the years a lot of people have come forward claiming that they know the truth about this mysterious sphere. And a lot of websites say that they have debunked it. And there is no credibility to any of these statements whatsoever. One such article comes from Skeptoid, within Skeptoids article a man claimed that he had gotten the sphere from a friend who had got it from a company. And when this man was driving it fell off the roof of his van then the orb fell onto the Betz property. And when the man was asked what was his friend or the company’s name the man wouldn’t say. OK , well that solves it then, this guy must be telling the truth the Betz sphere is now solved, I mean come on. Now I respected these type of debunking websites especially Skeptoid but just because some man comes forward with a story doesn’t mean its debunked. And if a company made this sphere I am sure the scientist and doctors who examined it wouldn’t have been so amazed by what they found. Making the Betz sphere one of the greatest mysteries of the 20th century.