In the remote jungles of Africa mainly in the Congo region there are legends about huge spiders that can trap and eat human beings. And over the past couple of centuries there have been some very interesting and just out of this world documented sightings. One of the most famous of these sightings happened in 1938 When Reginald Lloyd and his wife were exploring the Congo region. One day they were driving down a very remote road when they saw what they thought was a large cat walking across the road. But when they stopped to avoid hitting it they realized that this was something a lot more terrifying than a large cat, it was a gigantic spider. And Loyd and his wife just sat there in complete shock staring in total disbelief. And they claimed that they were able to get a good look at it before it went back into the jungle. And they stated that this spider was about 4 to 5 feet wide. And they were just so terrified by what they saw that they immediately went back home to Rhodesia. And not to long after this sighting got very famous. 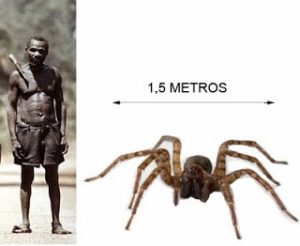 Another encounter with these large giant spiders happened during the late 19th century when an English missionary Arthur Simes and some porters were exploring a large lake in eastern Africa. While they were trekking along the outskirts of the lake some of Arthur’s porters got stuck in a huge network of webbing. And this webbing was so strong that they were not able to break free. Then two giant spiders with leg spans about 4 feet wide came out from the jungle and bit these men. Now Arthur was able to witness most of this and in the end he was finally able to drive these spiders away with his pistol. But sadly it was too late for these 2 porters because they died very quickly from the venom. Now Arthur could not believe that spiders this big actually existed, And this is the first documented sighting that I could find coming from a western explorer. But the natives have known all along that these spiders do exist.

Another interesting story happened when a naturalist and cryptozoologist William J. Gibbons was in Africa looking for Mokele-Mbembe. And while he was talking to the natives they told him about these huge man-eating spiders. And Gibson was shocked because these people knew everything about them. They told him that the eggs were the size of peanuts and when a nest would be found they would never go back to that area. They also told him that newly hatched spiders would be yellowish in color and when they got older they would become a darker brown and that also their venom could kill a human extremely fast just like the previous sighting coming from Arthur Simes. Now they explained to Mr. Gibson that these huge spiders use to be seen very frequently but now the sightings are extremely rare. And Mr. Gibson was really blown away by this because these natives knew a heck of a lot about these giant spiders. And there have been many times in our past were people from the west thought that the natives throughout the world were just making up stories about animals. But in the end they turned out to be telling the truth ,such as the gorilla, panda and many, many more. Now if these huge spiders do exist in the remote jungles of Africa they must be extremely rare because I could only find 2 documented sightings. But just maybe there are a lot more encounters out there but they might not want to come forward with their story’s because they know that people would think that they are completely nuts.

Now after doing a lot of research on this subject I was able to find another very similar sighting but this time coming out of Eerie Missouri right here in America. One day a man was fishing the Missouri river when he started to hear something moving to the left of him. And when he turned to look he claims that he saw a spider that was about 5 feet wide. And his description of this spider is very similar to that of the natives in Africa. In his own words “I’m lucky to go fishing almost every weekend, wife allowing, so I know what kind of animals live around here. I have plenty of experience around the woods and the rivers. It was around noon, I sat down for a few minutes for a smoke when I start hearing dry leaves moving to the left of me. I turn my head to where I heard the noise and I saw a huge, long pair of hairy legs grabbing my canteen that I had just placed there a few seconds ago. It scared the bejesus out of me, I almost swallowed the smoke. I know people won’t believe me, I don’t believe it either. But that thing measured, I estimate, around five feet wide.” Now this case did get some attention at the time making this another very interesting sighting. But it could simple be a case of miss identification. And I hope it is because I do not like the idea of huge 5 foot wide spiders living right here in America.

2 thoughts on “Are There Giant Spiders Living In The Congo?”