It’s been awhile since I covered a good monster sighting and I would like to thank my subscribers for bringing this cryptid back to my attention. I have covered this before but only very briefly. The devil monkey is said to be about 3 to 4 feet tall and they have been described as a shaggy canine faced baboon like creatures with very powerful kangaroo like legs. They are also said to have tiny pointed ears a bushy tail and razor-sharp 3 toed feet. And they have been mostly seen in the mid west, Canada and even as far north as Alaska. And many believed that these creatures do exist and some even mistake them for the legendary Bigfoot. Well that is until they see them move. The first possible encounter with the devil monkeys happened in 1934 in South Pittsburgh. Eye witnesses described a mysterious small ape like creature that could leap across fields at lighting speeds. It was said by some that this animal could jump up to 20 feet making some believe that it was some sort of unknown kangaroo. 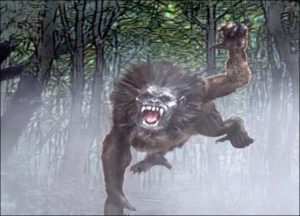 Then in 1959 a couple and their young daughter were driving through the mountains near their home in Virginia. When all a sudden an ape like creature attacked their car leaving several scratch marks on their vehicle. And the young girl who was sitting in the back got a very good look at this creature. She said that was a monkey with very powerful legs and that it had taffy colored hair. Then a couple of days later and not that far away from this encounter two nurses were driving home from work in the morning when they too were attacked by what many believe to be the exact same creature. And this creature was so strong that it was actually able to rip their convertible top right off. And these 2 women just scared out of their minds started to scream their heads off. And there screams scared this creature away and they very luckily managed to escape unharmed. But they will never forget what they had encountered on that day. And these 2 cases were the first official sightings of devil monkey.

Another case happened in 1969 in British Columbia when quite a few eye witnesses claimed that they had seen some very odd-looking long tail monkeys. And these unknown animals left some very unique 3 toed tracks. And after these sightings some scientist and researchers went to this location to see if they could find or capture these mysterious primates which they believed to be the so-called devil monkey. But they never could find them. But they all strongly believed that these eye witnesses were telling the truth and the footprints that they found did appear to be genuine. Then in 1973 a very famous cryptologist of the time Loren Coleman also went to investigate reports of giant monkeys in Kentucky. These eye witnesses claimed that these monkeys killed a lot of their live stock. But yet again Colmen and his team couldn’t find any actual proof but they did believe that these people were being honest.

One of the creepiest alleged encounters with a devil monkey or something similar happened in Chicago in 2006. On January 12th a family entered into their home when they came to face with a very mysterious evil-looking creature. And this creature was attacking their dog. And of course this family was shocked beyond belief, they couldn’t believe what they were seeing. They said that this animal was like a mix between a monkey and a wolf. As it had long fangs a long tail and extremely bright glowing eyes. And instead of running away like the rest of the family the man of the house ran for his camera and he was able to get a picture of this animal. And after he took this photo this terrifying looking creature got up on its hind legs and ran away. Now I couldn’t find anything about this being a hoax but I am sure that this could easily be Photoshoped. And it appears that this thing whatever it was had the body of a dog. But the face is very unique and quite terrifying. But the dog on the right appears to be unharmed and having a good old-time. So I am sure this is probably nothing more than a hoax. But an interesting thing is not to long after this sighting another man who lived not that far away claimed to see a similar looking animal hanging in a tree by its tail. 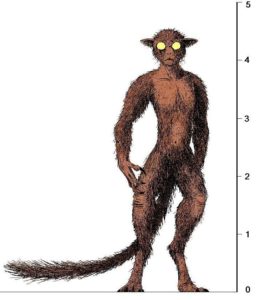 A more credible account comes from a biologist in Louisianan in 2009. In his own words “As I sat there alone gazing out at the rain when I noticed some movement to my left in a large field next to this property. This field is separated by an old fence with scattered pine trees next to it. I turned to look and saw something and I honestly don’t know what it was. it was running extremely fast on all fours from the field towards our location. At first I thought that it was a dog, but as it got closer and closer I realized that I was wrong. This thing, whatever it was ran on all fours to a spot in the fence were the trees were about thirty feet apart. And it leapt over a five foot fence in just one leap. Now once on my side of the fence this thing stood up on its hind legs. It was only about thirty feet or so from me at that point. And that’s when I got a really good look at it. It was about four feet tall, maybe a little bit bigger. It had really big yellowish eyes, large pointed ears and it had very shaggy fur. It stood up on its tiptoes and it had a long bushy tail, kind of like a squirrel, but not nearly as furry.

The snout was very catlike and I was close enough at this point to make out the thick hairs on its face. I’m inclined to believe that these may have been whiskers. Once it stood up on its hind legs it kept its arms to its sides much like a human, but it’s elbows were slightly bent. And I could now see its claws. Now I know I saw something on that day that I just can’t explain and I know that I can’t convince others to blindly accept what I say. But I am not trying to convince anyone but rather find answers for myself.  In any case after considering the evidence I firmly believe that what I saw on that day was indeed a devil monkey“.

And there is also a very famous photo of a dead animal that got hit buy a car in Louisiana in 1996. And many believe that this is an actual carcass of the devil monkey. But some say that it’s nothing more than a dead dog. Now one of the most famous sightings happened In 1979 in a small town in Georgia. And what makes this case so interesting is that there were just so many sightings being reported of a bipedal monkey like creature. And the description of this beast was pretty much identical to that of the devil monkey. One women said that it was the ugliest thing that she had ever seen in her life. And she said that this thing had the face of a dog which is very common in regards to devil monkey sightings. As most eye witnesses say that they thought they were looking at unknown evil-looking dog. Then once they saw it move they realized that this was no dog but a monkey.

And many believe that this creature might just be the legendary Chupacabra. And some believe that they are not monkeys at all but demons not from this world. Now whatever the case maybe they are a lot of sightings of these creatures making many wonder could there really be an unknown species living undetected within these locations. And if we were able to find undeniable proof of these animals well that would just change everything. And I’m sure that would make scientist think twice about the legendary Bigfoot.