Over the past 60 years there have been some very creepy encounters with a strange humanoid like creature that seem to be related to UFO and alien encounters. And what makes these beings stand out is the fact that they always have a very eerie and un human like grin on their face. And this entity or whatever it is, is known as the grinning man. One of the first known sightings that I could find happened in 1966 according to the book “Strange Creatures From Time And Space.” From John Keel. In 1966 a women reported to the authorities that she was being chased by a very tall green man. And this encounter was just so strange that it quickly spread across town. And not to far away from this sighting 2 boys were walking and they were kind of freaked out because they had just heard about this women and her strange encounter. And while the boys were walking they saw a rather tall man standing behind a fence in some bushes. And this man was just staring at a house across the street. And so the very curious boys just stared at this person wondering what the heck was he doing because he was acting very unusual. Then this man slowly looked at the boys and he had the most creepiest grin on his face. And the boys later stated that his grin was somehow able to stretch all the way from one ear to the other. And they also noticed that he had very strange-looking elongated ears. Now the boys were just so freaked out by this creepy looking man that they ran away as fast as they could. And they too also reported this to the authorities. And they told the cops that he was wearing a one piece green suit. So they started to think that maybe this was the exact same person who had chased the women earlier. Then that very same night there were tons of reports of a very bright white UFO flying in the night sky. And since there were just so many sightings of this UFO the police actually went to go check it out. And not to long after they too saw this UFO hovering over a lake. And over the next couple of days people started to wonder if this strange-looking man was somehow linked to this UFO. 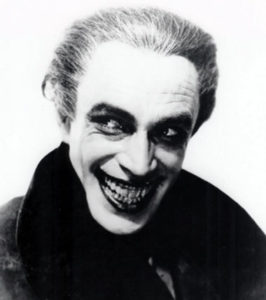 Then about three weeks later a sewing machine salesman named Woodrow claimed that he had been stopped on a highway by a rather odd-looking automobile. Then a man or what he thought was a man at the time came out from a hatch that was on the side of the vehicle. And Woodrow noticed that this man was very tall, bald, was wearing a blue looking metallic suit and had a very creepy looking grin on his face. Then Woodrow stated that this man started to talk with him telepathically and he identified himself as Indrid Cold. And Indrid told Woodrow that he would meet him again. And he did and the very next encounter according to this salesmen happened at point pleasant, and this was at the exact same time when all those Mothman sightings were going on. Making some speculate that the Mothman might have been following Indrid. That is of course if you believe if Woodrow is telling the truth. And it was also around this time when Indrid told him that he was an alien from a galaxy far away. And over the years Indrid would visit Woodrow and Woodrow also claimed that Indrid took him to his home planet. Now many years later after his first encounter Woodrow wrote a book about meeting and becoming friends with this alien being. And because of this book he got fired and not surprisingly most people believed that Woodrow was nothing more than a fraud. And this book ended up ruining his life. Now some believe that Woodrow was a fraud but maybe he might have been telling the truth about his first encounter with Indrid, or at least parts of it. But for those that know Woodrow personally believe that everything he said was true. And according to other paranormal websites there were other sightings of the grinning man during the Mothman sightings at Point Pleasant. But in the end the Mothman got all the attention.

Now one thing that I do find interesting about Woodrow’s story is the fact that he said that he had met other aliens like Indrid Cold and they all had grins on their faces. So could the grinning man be not one being but an entire alien species. And the reason I’m saying this is many now believe that these grinning men are the real Men In Black. As from time to time they do show up when something paranormal is going on such as the Mothman sightings in Point Pleasant. Another famous case happened to an Italian man named Pier. In 1979 when Pier was 26 years old he claimed that while he was on patrol he got abducted by three very tall yellow eyed reptilian creatures. And later on this abduction did get very famous and I did cover it on one of my weirdest alien encounters videos. But what I didn’t know is that Pier had another encounter with something else that also scared the crap out of him. One night about a year after his first abduction Pier was at a gas station when heard someone calling out to him from the shadows outside. Then Pier saw a tall humanoid figure that had a bald egg-shaped head, was dresses in a strange-looking Checkered suit, and had a huge very creepy grin on his face that stretched from one ear to the other. And this man spoke to Pier telepathically and he told him to drive his vehicle into a small cloud that was hovering just above the ground right outside the gas station. And pier felt as if he had no choice, he had to obey this man. So he got back into his patrol car and followed his instructions. Then once he entered the cloud, the cloud then flew to a massive UFO that was up in the sky. And within this massive UFO he saw all the reptilian creatures that had abducted him. And they were in very large transparent cylinders. And these cylinders were filled with a blue liquid. And the reptilian beings within them were unconscious, or maybe they were dead. Then the grinning man told Pier that what these other aliens did to him was wrong and that they were also his enemy. Then just like that he was taken back to earth. And he never heard from the reptilians or the grinning man ever again. Now most people never believed Piers story, all though his friends and family believed him to be a good an honest person. And now I find this case just that much more interesting because he described an encounter with a grinning man after being abducted by some reptilian aliens. 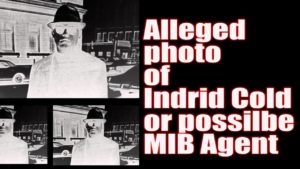 And also if Pier was making this up it would be very strange for him to add the grinning man to his story because nobody really knew about the grinning man at that time. Another account happened when a family, the Lilly family started to notice strange lights over their house on a nightly basis. And sometimes these lights or UFO’s would be so low that they could even see diamond-shaped windows on these crafts. And this phenomena was going on for quit sometime. Then one night the daughter, Linda woke up in the middle of the night and she saw a huge terrifying figure at the edge of her bed just staring at her. And she noticed that this person had a huge grin on his face. And Linda was just terrified, she was scared out of her mind. So she ran to her parents room and told them that there was a man in her room. And her parents freaked out by what she was saying got out of their beds as fast as they could and they ran into their daughter’s room thinking that there was an intruder, or maybe a stalker, but there was nobody there. And there were also no signs of any one breaking into the house. And after this young girls creepy encounter with the grinning man they never saw the strange lights over their house ever again.

Another case happened in 1987 when a family was vacationing in and around San Francisco. And once their nice little vacation was done they decided to take the 101 back home because it is a very scenic highway that travelers right along side the ocean. And that night while they were driving this family of four saw a very bright green ball of light in the sky. And it seemed that this odd green light was following them. Now this family wasn’t scared, they were amazed and excited. And they just couldn’t believe that this was actually happening to them. Then the next day after they got home the 2 teenagers were sitting outside and they saw a tall man dressed in all black just staring at them. And the way this man was looking at them scared them to death because he had the most creepiest looking grin on his face. And the daughter ran inside and told her father that there was a creepy looking man outside. And when the father went outside to see who this person was he was gone. And this man was just so creepy and strange that this encounter stayed with this girl her whole life. And she felt that this person was not even human, there was something just not right about him. And many years later she now believes that she and her brother had a face to face encounter with the grinning man.

Now like I said before most people today do believe that the grinning man is in fact an alien species, and that they are the real Men In Black. And it seems that even though they might be very scary looking to most of us they seem to be the good guys, well at least according to some of these encounters. And maybe they are here to protect us from other bad aliens. And maybe the reason they grin is they might actually think that its welcoming to us. But since it’s just so un human like it has the exact opposite effect, and instead of calming us it just scares the crap out of us. So hopefully they watch this video and learn that they should perfect their approach to us humans if they actually want us to talk to them. Or else we will probably just keep running away every time we see them!