According to Navajo legend a skinwalker is someone who is most likely a very holy or powerful person. Such as a witch or a medicine man within their tribe who has turned evil. In order to become a skinwalker one has to commit the most evilest of deeds such as murder. Kind of like selling your soul to the devil and in return you get supernatural powers. And a skin walker has the ability to turn into any animal, or even an improved more terrifying version of that animal. And most Navajo believe without a shadow of a doubt that these evil, supernatural human beings do exist. And they don’t really like to talk to people they don’t trust, strangers about them as they fear what might happened to them if they do. So most of the information we do get usually comes from young adults, teens or children because once they get older they start to believe and they stop talking about them. A very interesting thing about skinwalkers is most of the sightings that we know about come from non Navajo and they are always on or really close to Navajo reservations. As like I said before only a Navajo can become a skinwalker. Well at least according to what I have read about them so far. One night a women was driving across Navajo territory going about 60 miles per hour when she saw a man running right next to her car. And this person tapped on her car window smiled at her then ran off at amazing speeds in front of her then just disappeared. And of course this women was terrified, she couldn’t believe what she had just witnessed. So she wanted some answers and after a lot of research she came to the conclusion that she must have come face to face with a skinwalker. 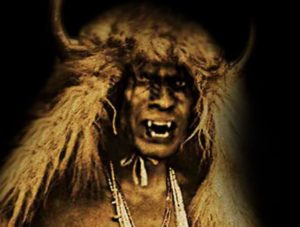 Then not to far away from this location a man was driving near Sedona when he experienced pretty much the exact same thing. While he was driving he saw something that looked like a human being running right past his truck. And he claims that he was going at least 65 miles per hour. And there have been many more sightings just like these, especially in Arizonan. One of the most famous locations for these type of sightings is a place known as Winslow and Window rock. But I wouldn’t recommend going they’re looking for skin walkers as you never know what you might find and encounter. Another case comes from a young girl who was taking a trip to see her grandmother in Nevada. And her grandmother was full blooded Navajo. And one day this young girl was playing outside when see heard her grandmother screaming at her little brother to come here and to get away from it. So this young girl thought that her little brother must have found a scorpion or maybe even a rattle snake. But to her surprise it was a very unnatural huge looking dog. And it just sat there just staring at her grandmother. Then after a minute or so it finally took off. And the grandmother said that the skinwalker had found me. And she moved away right after this encounter. Now this young girl couldn’t remember if the dog took off at amazing speeds, as that is what skinwalkers are famous for. But she does remember that it was huge and its eyes were a very creepy yellowish color. And she knew that her grandmother truly believed that it was a skin walker.

Another sighting happened to a man who went to go visit his family on Christmas. And his family owned a nice little farm near Navajo land. And one night he heard what he thought was some wild dogs just going crazy outside. So he put on his boots grabbed his shotgun and went outside hopping to kill or scare them away from the family farm. And then he saw 2 rather large dogs fighting with each other in a nearby field. And when he pumped his shotgun they looked at him, then they got up on their hind legs and ran away so fast that he could not believe what he was seeing. Now his family had always told him about skinwalkers but he never believed it, until now. Another very similar encounter happened when a women in New Mexico saw a very odd looking creature outside her house one night. At first she thought that it was a man but this thing, whatever it was had very odd posture and it was standing perfectly still. So this women was wondering if her eyes were playing tricks on her as it was nighttime. But when she got closer she realized that this thing had the head and body of a wolf but it was standing on its hind legs and it was rather muscular. Then this women screamed her head off and this creature took of at very fast speeds on it’s back legs back into the darkness. And at this time this women was convinced that she had seen a werewolf. But her grandmother who was Navajo told her later on that it was a skinwalker. Making me wonder if werewolves and skin walkers are the same thing. 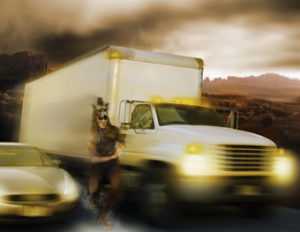 One very creepy encounter comes from a high school student who was on a bus with his teammates heading back from a high school basketball game. It was very late and a full moon was out. And they had to go through Navajo territory in order to get back home. And right after they reached the reservation the bus driver speed up to about 85 miles per hour, probably as fast as this bus could go. And this high school student thought that this was very odd as he had never seen this bus driver break the law before as he was a very careful driver. Then this high school student saw something in the desert that appeared to be moving rather fast and heading right towards the bus. And as this student was just staring in awe wondering what the heck was this thing he saw it. And it looked like a human but it also had the face of an animal with glowing eyes. And this thing, this creature was running right next to the bus. Then it made eye contact with him then it smiled and he could now see this monsters teeth and they were not the teeth of a human but more like the teeth of a dog. Then it got down on all fours and just disappeared from sight. Now this student was of course freaking out and he looked around the bus to see if anyone else had seen it. But all the other students were sleeping as it was rather late. Then the bus driver turned around and made eye contact with this student. And they both knew at that moment that they both had seen this creature. And that is probably why the bus driver was going so fast as he must have saw it approaching the bus.

Now there are so many encounters with skinwalkers that it is rather disturbing and it seems that most of these sighting are all extremely similar. But most of the time it seems to be a dog or a wolf or some sort of hybrid. Such as a wolfman or a dogman with supernatural abilities. And one thing that I did learn while researching this video is that in order for a skinwalker to turn into an animal he or she has to kill that animal then absorb its power. Which is very interesting, making me wonder that if one of these skinwalkers kills a bear could it turn into something like a Bigfoot. As most of the time these skinwalkers are seen walking on its hind legs in the form of the animal that it’s killed. And if it killed a bear I am sure that it would look very similar to a Bigfoot while it was in human bear form. But of course a lot of Bigfoot sightings are far away from Navajo territory. But hey maybe that’s why Bigfoot never gets caught. Now I am not saying I believe in this legend but as a paranormal junkie I try to never rule anything out. And if I am ever in or driving through Navajo land I will be sure to be on full alert.

0
SHARES
FacebookTwitter
« The 1966 Westall Mass UFO Sighting
Is The Houska Castle A Portal To Hell? »