In September of 2015 a show called darkness radio was talking about the black eyed children. And a man called in and he told them about a very creepy encounter that he or somebody that he knew had with these kids. This man claimed that in 2012 an attendant at a gas station in Louisiana came face to face with the black eyed children one very windy and stormy night. And this gas station is pretty much in the middle of nowhere. At about 3:00 AM one evening the power went out so this attendant had to use his phone as a flashlight so he could go turn on the backup gas generator. But this back up generator only powered up some of the parking lot and the area around the register, so it was still pretty dark. And while this man was looking outside he saw something moving just beyond the trees and he was just staring and wondering what it could possible be. Then emerging from the darkness was 3 kids on bicycles. And the attendant was no longer scared but concerned as there shouldn’t be kids outside alone in the middle of nowhere at that time of night. 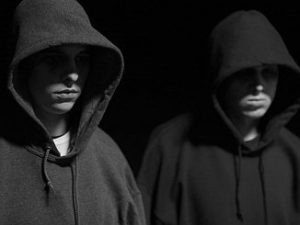 And he was also wondering where they heck did they come from as there were no houses around this area. So the attendant went to go open the door so he could ask them if they were ok. And right after he opened the door he was approached by one of these kids, a little girl. And this girl asked him if she could use his phone. And the attendant said yes Of course you can and he handed the young girl his mobile phone. But she replied in a very rude and nasty tone No. She said that she wanted to use the phone that was inside. And right after she said that this man saw that this little girls eyes were all black and he was struck with fear. And without even thinking about it he just slammed the door on her. Then he told these kids that they needed to leave. This man was terrified. But these kids just stood there staring at him, but once they realized that there was just no way he was going to let them in they left. And not to long after his boss showed up and this attendant couldn’t wait to tell him about these creepy kids. And his boss was very fascinated with his story and he wanted to see them for himself. So he went to go look at the security footage. But due to the fact that the power was out at that time the cameras were down. Making the attendant wonder that maybe they, the children had something to do with this power outage as they did arrived right after the power went out and right after they left the power did turn back on.

Then in 2010 a man working the night shift was taking a break when he saw two teenage boys across the street. And these teenagers were very still just staring at him and this really freaked this guy out so he went back inside. And a couple of minutes later the intercom at the front door buzzed. So he went to go look at the monitors to see who was there, and it was these kids. So he pressed the button to see what they wanted but they didn’t speak they just stood there. Then they communicated with him with their hands telling him to come outside. And he said no and he told them that they needed to go. And these kids just continued to stare into the cameras. So this man was getting very angry and about 10 minutes or so later he decided to go to the door to try to get them to leave. But before he opened the door he wanted to get a good look at these kids through the one way glass. And that’s when he noticed that they both had solid black eyes. But he still opened the door anyway and he was going to tell them that if they didn’t leave he was going to call the cops. But before he actually said that they said that won’t be necessary as if they were able to read this man’s mind and they told him that they just needed to use the phone. But he told them they can’t cause no one was allowed inside the building. Then he closed the door and went back to the monitors to see if they were still there. And one boy still remained but the other went to the back and once there he just started to stare into that camera. Now this man was really freaked out it was like a scene from a horror movie so he finally had enough and he called the cops. And right after he called the cops these black eyed kids left it was as if they knew that he had contacted the authorities. And when the police arrived they were nowhere to be seen. Now later that day he told his buddies about this creepy encounter and they told him that he had just come face to face with the black eyed children and he was now very thankfully that he did not let them inside.

Another very creepy story comes from North Carolina in 2009 from a United States Marine. This marine stated that one night he was alone in his room watching a movie when he heard a knock on his door. At first he thought that it must be his roommate as his roommate was always forgetting his keys. And when the Marine opened the door he was very surprised to see two small children standing there. And right away he was filled with a sense of dred. And for a couple of seconds they just stared at each other. Then this Marine noticed that both of these children had solid black eyes. And then he asked them what they wanted and they replied that it was very cold outside and that they wanted to come in. And after they said that this marine slammed the door on them as he was really freaked out by what that said and also by their eyes. He felt that there was just something very unnatural and very evil about these 2 children. Then not to long later they were back knocking on his door and he threatened them. Then when he was trying to get some sleep he heard rattling on his window as if someone was trying to break in. But when he looked outside there was nobody there. And this marine was pretty scared but eventually everything stopped. And the next morning he asked around cause he was trying to get to the bottom of this. But no one else had seen these kids which he thought was a little bit odd as why did they only bother him. Now this marine was not a believer in the supernatural or the paranormal until he meet these children as he strongly felt that they were evil. And just maybe there are things within this world that we have yet to explain. 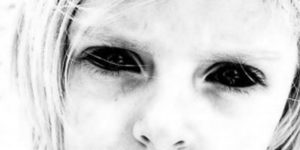 Ever since I started to cover the black eyed kids I have been getting quit a few request to cover this next story. According to the YouTube channel fantastic daily 2 black eyed kids were arrested for trespassing when they tried to break into a hotel in Manchester. According to this channel at about 4 am 2 teenagers were seen on security cameras entering into this hotel, approaching the desk clerk. And through the security footage it seemed that this hotel employee and these kids started to argue and the desk clerk was trying to get them to leave. Then all a sudden as if he was in a trance like state he handed these kids the master key then gets up and leaves. Then a couple of minutes later this desk clerk is seen again running across the lobby, pulls the fire alarm, then calls the police. And the police eventually found these kids hiding in a maids closet. And they had in their possession a maids outfit and also maintenance clothes. So it seems that these black eyed kids were trying to gain the trust of the hotels guest by looking like the staff. As we all know that all these black eyed children want to do is enter into your room. And there is no better way to do that in a hotel if you work there.

Then back at the police station they could not provide a name or any documentation. And since these kids had solid black eyes the police called in a doctor. And after examining these 2 teenagers the doctor stated that they were perfectly healthy and that there eyes were naturally all black. This was not caused by any contacts or any kind of modification. Then the kids were sent to protective custody and no more details were released to the public at that time. Now this story is extremely creepy but after trying to find any truth to these claims I couldn’t find anything so I do not believe that this story is true. As I or anybody else would easily be able to find some sort of credible article about this online. But I am not accusing this channel of making up stories just to get views as there are a lot of websites out there that make up stories just like this one for entertainment purposes. And maybe he stumbled upon this story through one of those type of websites and thought it was true. And also one thing that I do I know if these black eyed kids are real then they must be supernatural and possess some sort of unknown abilities and they don’t get caught.