Today I have something extremely evil to share with my fellow paranormal junkies, an alpha possessed object. over the past couple of weeks we have covered a lot of the worlds most haunted objects. They are all very good, and very creepy story’s. But every now and then you come across something with so much evidence to back it up that it turns the most skeptical person into a believer. 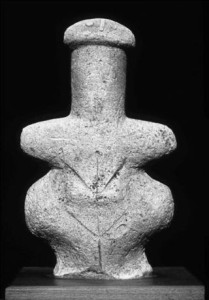 This ancient statue was first owned by Lord Elphont. Within 6 years of owning this statue all 7 members of his family died, and they all died in very mysterious ways.

Both of the next two owners of the goddess of death statue died along with their entire family’s. Now Not to long after that the next owner his wife and 2 of their daughters also died.

The two remaining sons of the family were scared for their lives so they decided to donate the statue to the royal Scottish museum in Edinburg. Shortly after the statue was displayed in the museum the chief of that section also died.

After his death the museum did a very smart thing and put this deadly statue in a glass case so no one could ever touch it again. It was a very smart move as no one has died from this statue since. “The women from lemb statue” might just be the worlds most evil object.

The women from lemb statue or the goddess of death only had 4 owners since it was discovered. All the owners and there entire families died. With the exception of the 2 sons from the last owner. This can not be just coincidence or bad luck. The only other thing I can think of is maybe some unknown substance exist on or within this statue that slowly kills anyone that constantly stays within this statues radius. Or it really is cursed and there is no scientific explanation as to why and how this statue can wipe out entire family’s.

I am very curious and I want to know what you guys think? Do you think the women from lemb statue possesses a real genuine dark curse from our ancient past. Whatever the case maybe this statue deserves its name “the goddess of death”.

3
SHARES
FacebookTwitter
« Life After Death – Are these Story’s Proof Of The Afterlife?
Top Mysterious And Strangest Disappearance Of All Time Part 1 »