I would like to wish everybody a Merry Christmas and Happy Holidays! I hope everybody is doing great. I am very busy this month but I will start uploading again very frequently in January. I wanted to upload a long Christmas video but sadly I am very short of time this month so I decided to cover this next mystery, a mystery that I have been wanting to talk about for a very long time. 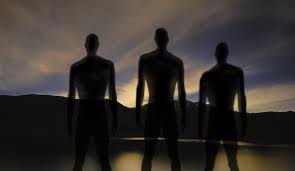 In the Santa Lucia Mountains in California there are some very creepy and strange sightings of beings known as the dark watchers. The dark watchers are said to be giant human like phantoms that are only seen during dusk. Eye witnesses claim that they these beings stand on peaks and just stare into the horizon, as to what they are looking at we could only imagine. And if you acknowledge their presence or try to approach them they will disappear right before your eyes.

Now there have been a lot of people claiming to have seen these mysterious entities over the years. And even the Native Americans have cave art depicting these beings, according to some paranormal researchers. And I find that very interesting because if these entities do exist then the native people would have been the first to know about their existence. And every Native American tribe that lives within this region have stories and legends about the dark watchers and they refer to them as the old ones. Beings who have been here long before we, Homo sapiens had ever arrived to this continent. Some of the earliest sightings coming from non natives happened when Spanish explores ventured north looking for gold. And sometimes these explorers would tell tells of very large dark, human like entities watching them from the cliffs of the mountains as they rode on horseback down below. And later on Mexican soldiers also have claimed to have seen these exact same mysterious beings.

So they have been noticed and talked about for a very long time. They have even been mentioned in poems and short stories throughout the years. Such as John Steinbeck’s short story “flight” where he talks about a man who had seen a huge human phantom like figure standing on top of a rock only to disappeared right into thin air.

One of the more famous recent sightings happened in the mid sixties when a high school teacher from the Monterrey peninsula went out hiking. And While he was out walking along a mountain path he saw a dark figure that seemed to be studying the mountain. And he noticed that there was something just not right about this person. So he called out to him to see if he needed any help or anything. And once he called out to him, or it, it just disappeared right in front of his eyes. So this teacher now really freaked out decided to get the heck out of there. And once he got home he told his friends and family about what he saw. And after doing a little bit of research he came to the conclusion that he must have come face to face with a dark watcher.

Another sighting comes from a man named Joey who is a long distant runner. While he was training in the San Fernando valley he saw a dark human like figure standing in a place were no human should be standing. Because there was just no way anybody could get there, well at least not without the right climbing equipment. So Joey really curious just kept looking, wondering what the heck was this person doing there. But after his run he kind of shrugged it off and he didn’t really think too much more about it. But then about a year later he saw the exact same figure standing at that exact same spot. And this time Joey was really freaked out, he felt that there was something just not right about this person. He believed that it wasn’t even human at all, all though it did have the figure of a human. And he just kept staring at it until it finally disappeared right in front of his eyes. Now Joey knew all about the legend of the dark watchers but it wasn’t until a couple of days later that he finally realized that this must have been one of them because he believed that there was just no other explanation.

Now these type of sightings do happen quit often within this region and some claim that a feeling of dread just comes over them. Very similar to mothman sightings. And some say that they clearly saw a hat on one of these beings. And that really stood out to me because there is an entity known as the hatman. The hatman is one of the most terrifying entities because the people who come face to face with it are in a state known as sleep paralysis. They can’t move, they can’t talk, they just cant do anything. And if that isn’t terrifying enough these people also see entity’s and one of them is known as the hatman. Making me wonder could these dark watchers somehow be related to these other mysterious entities?

Now sleep paralysis is one of the most terrifying paranormal mysteries because how can so many people suffering from the same terrifying disorder see the exact same beings. And I will be covering this later next month. And I will also see if I can find anymore information about the dark watchers. But to me it seems that these entities are some kind of shadow people, possible from another dimension!