In my last video we talked about a statue in Hobbs, New Mexico that started to cry olive oil. And according to the reports nobody can explain what is causing this. And in that video I quickly talked about 2 more cases, another case of a statue crying in Japan in 1973 and another case known as the Fatima Miracle, or also known as the miracle of the sun. And many believe that these 2 cases are connect. And what makes the miracle of the sun event just so amazing is the fact that there was just so many witnesses. Now this all began in Portugal in May of 1915 when three children claimed to have seen an angel like being that was glowing and just floating over the trees. And over the next couple of weeks they saw this divine like apparition 2 more times. Then about a year later they saw it again, but this time it flew closer to the children and the children saw that it was a boy. And Lucia the oldest of the 3 children stated that this boy was as transparent as lighted crystal. And then the boy told the children that he was an angel of peace and then he taught these children a prayer. 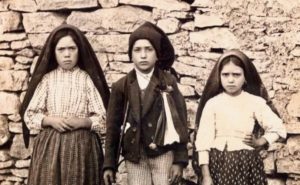 Then on may 17th, 1917 the children were watching their sheep when all a sudden a bright light appeared above them, and within this light there was a beautiful lady. And this lady told them that she was from heaven, and she also told them to come back to this spot every 13th day of every month. Now most people didn’t believe the children but some did and when they went back to this location the next month there was about 50 people and the month after that there was forty-five hundred people. And these spectators mostly adults never saw the angel but they did see and hear some very strange things. One time when a meeting between the angel and the children was over everybody heard a loud explosion followed by a cloud that just appeared out of nowhere, then it flew into the sky. And they also noticed that it was a lot colder when these meetings were taking place.

Now this angel who was now known as the lady of the rosary showed the 3 children visions of demons and great fires. And she told them that the great war, WWI which was going on at the time was about to come to an end, And she also told them that there would be another world war if mankind did not change their ways. And she also warned them about Russia and the future assassination of a pope. Now these prophecies are known as the 3 secrets. And to me these 3 secrets are not that impressive because most of them were not even revealed to us until after it had already happened. But what is mind-blowing about this case is that the Angel, the lady of the rosary told the children that she would work a miracle in October to prove her reality, and something unexplainable did happen. Now the children at this time before the miracle that happened in October had a lot of followers, but there were still a lot of people who did not believe them. And there was also some very powerful people who thought that these children were extremely dangerous because to them this was nothing more than a lie, a hoax on a massive scale that was getting a lot of attention. And the local mayor even put these kids in jail in hopes of making them confess that they were lying. But the children insisted, even while they were starving in jail that they were telling the truth. And eventually the mayor had to let them go.

Now the kids told everybody that the lady of the rosary was going to perform a miracle on October 13th. And people from all over came to Fatima. It was estimated that 70,000 people where there on that day. And what they all witnessed has been debated ever since. But every non believer that was there were full-blown believers after they witnessed this. Now this all started when Lucia unknowingly to her pointed towards the cloudy sky. Then the spectators saw the clouds dissolve and then the sun turned into a silver spinning disk that shot beams of light in all directions. Then the light from the sun or this disk started to get very dim and everybody could see the stars as if it were night. Then the disk started to fall closer to the earth and it started to zig zag back and forth. And the people thought that this was the end of the world. 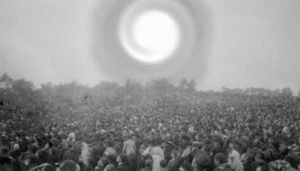 But then slowly this silver disc returned back to the sky and reconnect back with the sun. And after this miracle, or whatever it was everybody dropped to their knees and started to prey, they were terrified. Now what is just so amazing about this case is the fact that 70,000 people all witnessed this. And what gives this case even more credibility is the fact that almost ever single picture that was taken during this time couldn’t be properly developed, and nobody could ever explain why. And ever since this event people and organizations from all over the world who were never there have been trying to disprove this. And they are still trying to this very day. But how can you disprove what 70,000 people all claimed to have seen. Now I am not a religious person, for all I know it could have been an alien having fun with us, or maybe one of these kids had some sort of supernatural ability, I just don’t know. But I do believe that something remarkable, something unexplainable did happen on that day.

Now there was also a very similar case that happened in Japan in 1973 when a nun also started to have visions, just like the 3 children of Fatima. And her visions came from a statue. And all though nobody else saw these visions they did see the statue crying. And this is the only weeping statue that has been official recognized by the church as being supernatural, or a miracle. But there have been other crying statues throughout the world that have never been solved. Now these visions that this nun was having is believed to be an extension of the prophecies of Fatima. And I find this prophecy that was revealed to us in 1984 to be very scary because we are seeing it come true right now word for word. This prophecy states that during the end times the devil would have successful infiltrated the church and bishop will be against bishop, priest will be against priest, churches and alters will be sacked. 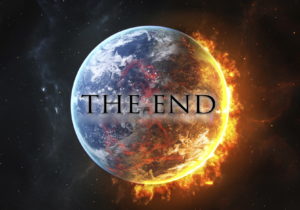 And we are seeing this right now as Europe and all western civilization is seeing a huge surge in migration. And some priest and bishops are for this and some are against it. And very shockingly some members of the church are for abortion causing an uproar in the holy community as the church has never been for abortion, well at least not to my knowledge. And were also seeing churches being destroyed on a massive scale, and some of these churches have been around for hundreds if not thousands of years. So there is definitely a battle going on right now within the church and it seems to be just starting. And back when this prophecy was told in 1984 nobody would believe that bishops would be against bishops or priest would be against priest.

But this is happening right now, so it is kind of scary because if this is the end times as this prophecy states then that means things will start getting a heck of a lot worse. Now of course this could be just a lucky prediction, and everything is just fine. There have been plenty of times in my life when some holy person or a priest have stated that the world was about to come to an end, scaring a lot of people to death. But that day came and nothing happened. But if things do start to get worse and the actual Biblical prophecies start to come true, which some already have, and we are in fact living in the end times then hopefully we will all find comfort in knowing that there is a creator.