Not that long ago I covered the angel sightings at the Battle Of Mons and that reminded me about this next case. I heard about this a long time ago on maybe unsolved mysteries or one of those type of paranormal shows when I was a kid. And I was just amazed by these stories and these sightings, it really just blew my mind. In the spring of 1967 the Jewish people of Israel were preparing for war as they were about to be attacked by 4 pretty powerful army’s within that region at that time. Iraq, Syria, Jordan and Egypt. And these 4 combined nations had a heck of a lot more soldiers, more tanks, planes, fire power and experience than the Israelis. And many believed that this was going to be the 2nd holocaust as nobody thought that they were going to survive this attack. But not in years or months the Israelis were victorious in 6 days and it was considered by many to be a miracle as there had never been a victory like this in modern history.

And not to long after and still to this very day soldiers from both sides have come forward claiming that they had witnessed things that they just couldn’t explain. Now the Jewish state of Israel official happened in may 14, 1948 and ever since then there have been battles and other divine sightings. One very famous case happened in 1958 when the IDF “The Israel Defense Force” went into the Golan Heights to fight the Syrian army. And a man from the IDF got run over by a tank and he was seriously wounded. And the Syrian soldiers saw this man lying helpless on the battlefield so they pulled out their guns as if they were going to shoot him. But all a sudden they just started to run away. And these Syrian soldiers later stated that they saw thousands of angels around this man. And at about the exact same time this wounded soldier said that he had heard the voice of God. And this voice, God told him that he was not finished with him yet and this man survived.

Then In 1973 a lone Israeli soldier took an entire Egyptian patrol all by himself. And when they asked the Egyptian commander why he and his men gave themselves up to this one lone soldier he replied “one soldier, no there were thousands of them” and when the crossed into Israel territory these beings disappeared. And this soldier who was now a hero said that he couldn’t make any sense of it, he thought that he was going to die. But instead the Egyptian forces just turned themselves in. And in another case a small Jewish community with no soldiers was under attack by Arab forces when all a sudden they just ran away in great fear. And they later stated that they were being attacked by huge strange beings with flaming swords.

Now during the six day war something else other than divine beings happened and it’s just as baffling. One day 2 Israeli soldiers were on patrol when they saw in the distance an Egyptian half track equipped with mounted machine guns and filled with soldiers heading right towards them. And these 2 soldiers had nowhere to hide so they had no other option but to stand their ground the best they could. But these Egyptians never attacked and their half track just stopped. So the 2 Israelis approached this vehicle and they saw 18 soldiers cowering in fear. And these men were begging for mercy and they gave up. So the 2 Israelis captured these 18 men. And when they were later asked why didn’t they shoot they replied that they were about to attack but then they were just struck with fear and their body’s froze. It was as if somehow they became paralyzed, they could barely hold onto their weapons. Now there was just no explanation for this so these 2 Israelis and also the Egyptians believed that god must have done this to them.

In another case an IDF truck filled with ammunition headed for the front lines was hit but the shell never exploded. And if that shell would have went off it would have killed hundreds of Israeli soldiers, civilians and also would have destroyed many buildings. Then a day or so later a Rabbi was leading some troops to the western wall of the temple. And this Rabbi seemed to be immune to the gun fire as he was all alone in the front leading the charge. But somehow he never got hit and this really didn’t make any sense because of the amount of gunfire that was being exchanged. And because this Rabbi never got shot by any of these bullets they were able to win that battle. One of the most famous accounts happened when the Israeli forces where heading into enemy territory, and while they were entering into what they thought was going to be a very hostile town the Arabs, their sworn enemy were cheering, clapping their hands, just smiling at the approaching Israeli forces. 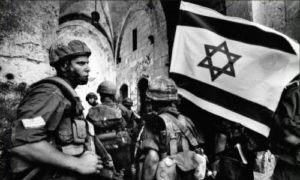 And the Israelis were extremely confused wondering what the heck was going on, why were they being so nice. And even the town guards were standing still, they didn’t even fire a single shot. So the Israelis were easily able to take over this heavily armed area. And later on they found out that these civilians these guards thought that they were the Iraqis and once they finally figured out that they were not the Iraqis but their sworn enemy it was already to late because by that time the Israeli forces had already took control of the town. And these type of strange event’s kept happening all throughout the war. And in the end the Jewish people of Israel were not only victorious in 6 days but they also finally took control of all their holy territory which they had been waiting for, for thousands of years.

And journalist and Generals throughout the world stated that no military logic or natural cause could explain this victory. And many saw this as a miracle. Now I do remember hearing in the past about angel or divine beings being seen during the 6 day war. But while making this video I couldn’t find any documented accounts of actual angel sightings. I could only find them before or after the 6 day war such as I described in the beginning of this video. But to me it seems that fear, confusion, and just unbelievable events won this war for the Israelis. Such as the Rabbi not getting shot, shells not exploding, and the Arab forces freezing in terror then becoming paralyzed for no reason. Now whether one believes in God or not something unexplainable whatever it maybe did seem to happened. And whatever this was did appear to be on the side of the Jewish people.

And throughout the centuries there have been other accounts of what many believed to be divine or otherworldly intervention. In 776 the Saxons were attacking the French when all a sudden flaming shields came down from the skies. And the Saxons believed that these flaming shields were protecting the French. And they were terrified by these objects so they retreated and the French were victorious. And I am sure that there are many more of these occurrences throughout our history and I will be sure to cover them as soon as I find them. Now because of these unexplainable, divine like happenings many believe that this is undeniable proof of god, some believe that it’s the work of extraterrestrials. And all I can say is that it does seem that there is something else out there and from time to time and for whatever reason this higher power does reveal itself and it does pick sides.