Over the past couple of months I have been seeing a lot of UFO reports on paranormal websites, way more than I usually see. And I always find UFO sightings to be interesting but most of the time I don’t really feel the need to cover them. But when I saw Secure Team 10’s video about the UFO that looked like a flying human I wanted to dig in a little bit more as that one really peaked my interested. A couple of weeks ago In Brazil some people were driving and they saw what appeared to be a flying human just floating in the sky. And I did find this video to be interesting as it looks like whatever this is, is not even moving at all. It just appears to be magically floating. And when I saw this video I wasn’t really thinking UFO, I was thinking flying humanoid because I have covered a lot of cases in the past about flying humanoid sightings in this part of the world. One of the most famous cases happened in Mexico when an officer stated that while he was on patrol he had an encountered with a flying humanoid. And that this creature actually attacked him. And still to this day this officers story has never changed, and he is not the only one. Over the past decade there have been hundreds of people claiming to have also seen one of these creatures. So when I saw this footage It did make me wonder if this is what these people were seeing, not a UFO, but a flying humanoid. Or it could just be a strange cloud formation. But I did find it to be interesting footage and it did remind me about another sighting that happened in Sydney Australia that happened back in October. And when looking back at that footage I was surprised at how similar they are. 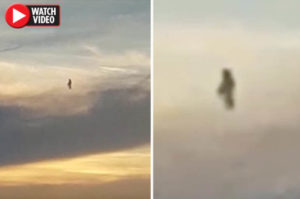 And this object that looked like a flying human over Sydney was seen for about 5 minutes and these eye witnesses also reported that it could disappear and reappear. But unlike the Brazil sighting this object was moving, but in the end nobody could figure out exactly what it was that they were looking at. Then we also we have another sighting of a flying humanoid that happened last October in the middle east. And some believed that it was nothing more than a rocket breaking up in the sky. And of course that could be exactly what it was. But the strange thing about this sighting is it was practically identical to the sighting that happened in Australia. So over the past couple of months we now have 3 confirmed sightings of a UFO that looked like a flying human. Making me wonder if there are going to be anymore sighting of these flying human UFO’s in the near future.

Then on March 30th passengers on a plane started to see something very odd outside of their window, and thankfully they were able to record it with a decent camera. And I must have watched this a dozen times and whatever this is, is not a cloud. And if you take into account that it was pretty far away and surrounded by clouds it could be a solid object. And when the passengers saw this thing they were very shocked. Then about a month before this sighting two pilots from different planes had a very strange encounter with something that they just couldn’t identify while they were flying over New Mexico. The first to see this UFO asked over the radio if another plane or something had just passed over them. The pilot asked: “Was anybody above us, to pass us, about 30 seconds ago?” And the air traffic controller replied: “Negative.” Then the pilot replied: “Well something did.” Then about a few minutes later the air traffic controller started to talk with another pilot that was real close to this location. And he asked the pilot if he had seen anything flying in the sky. And the pilot at the time replied no. But then about a few minutes later he let the air traffic controller know that he had just had a very strange encounter with something he just couldn’t explain. The pilot stated that he didn’t know what this thing was but there was just no way that it was an airplane.

Now a lot of UFO sightings do seem to be some sort of craft with something intelligent controlling it. But sometimes it could simply be something explainable. I remember a case that happened in Saudi Arabia when a lot of people saw a black horse flying in the sky. And this was happening during a very bad thunder-storm. And the people who were looking at this flying horse believed that it was a sign, and they were extremely excited and happy to witness this. But in the end it was just a balloon. Now a lot of people believe that since they are just so many UFO sightings being reported lately that aliens are trying to make it clearer to us that they do exist and that maybe pretty soon they might reveal themselves to us. But some are saying that these sightings are nothing more than top-secret government air crafts. And if that is true we must be a heck of a lot more advanced then we think.

Now I personal think that it is possible that it could be the military, but there have been UFO sightings like these going back ever since man first looked up at the sky. And I would like to believe that whatever is controlling these crafts are just watching over us making sure we don’t blow our selves up. But sadly that probably isn’t true because we are constantly at war. But it does give me some comfort to know that because of all these UFO sightings that have been going on for thousands of years makes me believe that we are probably not the only intelligent life form in this universe.

1
SHARES
FacebookTwitter
« The Big Grey Man Of Ben Macdui
What Is Causing These Mysterious Sounds? »