I am almost at 100,000 subscribers and I just can’t belive it. So I would like to thank you guys so much for being so awesome and always checking out my videos. You guys really do rock. If it wasn’t for you I probably would have quit YouTube a long time ago as making these videos at times can be a huge pain in the but. But in the end you guy’s make it all worth it. So I just wanted you to know how much you mean to me. And hopefully one day I will be able repay all of you for being so loyal to this channel. 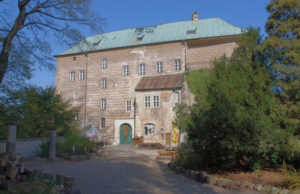 Now not that long ago I covered a story about Mel Waters and a creepy bottomless pit that was on his property. And after I released that video I got ton’s of request to cover this next story. In what is now the Czech Republic there is a castle known as the Houska Castle. And this castle was built in 1271, and the reason they built this castle in this location was to try to conceal a bottomless pit which many believed to be a gateway to hell or an entrance to the underworld. Now before this castle was even built the people who lived closed to this hole claimed to see half human, half animal like demons flying in the sky’s above as well as other mysterious terrifying creatures. And they believed that these, whatever they were came from the depths of this pit. And these monsters would terrorize these people. So at night everybody that lived close to this mysterious hole would stay at home and lock up their houses the best they could and pray and hope that they would survive until morning. And even during the day they tried their best to avoid this location. I mean these villagers were terrified as they truly believed that it was a gateway to hell.

And as you can imagine these people were very tired of living in fear every single day. So they decided to build a fortress over this evil pit in hopes of trapping these creatures so they could finally live their lives in peace. And in 1253 construction began and it was finally completed in 1271. And it was a huge success, there were no more sightings of these monsters, this castle did its job as nobody reported seeing these flying demons anymore. Well at least outside of the castle. As from time to time the villagers would hear terrifying screams and what sounded like clawing noises coming from within. It was as if these monsters were trying to escape. And it was also reported that many had also seen ghostly apparitions roaming these halls at night. So nobody wanted to live here as they didn’t want to take any chances. But at least they were safe as long as they didn’t go inside. Now if you look at this castle from the outside it would appear to have many windows but when you look closer you would realize that many of these windows are fake. And it also has no fortifications, no protection at all from an outside attack. And also there are no water sources anywhere close by. So for centuries people who didn’t know why this castle was built found this Gothic building extremely mysterious, cause it made no sense to them at all. Only adding to the popularity of the Houska Castle. And if you were allowed to go inside you would witness some amazing paintings. Such as flying demons, dragons, god, angels, the devil and even symbols of evil. Adding some credibility to these ancient stories.

Now there are still sightings and encounters of creatures and paranormal activity still going on within the walls of this ancient Gothic castle to this very day. A lot of visitors claim that while they are in the chapel they can hear terrifying screams coming from below, and this chapel was built right over this bottomless pit. Making many wonder could it be true, could there actually be some sort of unknown animal or demons living under this castle. And could it really be a gateway to hell. And there have also been many report’s coming from terrified visitors claiming that they had come face to face with a human frog type of monster wandering around the halls within this castle. And needless to say once they see this thing they run away as fast as they can just screaming their head’s off. And numerous caretakers over the years claim that on occasion they encounter a headless spirit stumbling along the courtyard. And it appears that there’s a lot of blood gushing out from its body. And there are also many other strange things going on here that just defy explanation, such as object’s levitating. Now the creepiest story that I have heard about so far happened before this castle was even built. Legend has it that one day the villagers wanted to finally get to the bottom of this mystery. They wanted to know if this bottomless pit was really a gateway to hell.

So they tied up a prisoner then lowered him down into this hole. And not to long after this prisoner let out a horrifying scream and when they lifted him back up they saw that his hair had turned all white and he also looked like an old man. He must have aged by at least 30 years. So after this experiment they did believe without a shadow of a doubt that this was a gateway to hell. So they decided that they needed to conceal it. Then they built this castle over it. And even the Nazis at one time performed rituals here in hopes of harnessing the powers of hell. So it does seem that something unexplainable might just be going on here. And also every paranormal group that has ever investigated this location have all came to the same conclusion. They say that this place is pure evil. Making this one of the most haunted and terrifying castles in the world. Now one thing that I would like to add is ever since man first lived within this region people have been thrown into this hole, such as murders, rapist you know just evil people. And I am sure a heck of a lot of incontinent ones as well. So could this be the reason for all this paranormal activity. Could it be possible because so many people have died here that it created a portal. Maybe a portal to hell or a portal to the other side. Making it possible for the dead and other unspeakable things to enter into the world of the living.