The black eyed kids surfaced a couple of years ago as people all across the world started reporting having encounters with these children that had black eyes. No white, just pure black. These kids would knock on door’s and ask if they could come inside.

When the people saw that these kids had pure evil black eyes they would start to freak out and tell the children to go away. After the encounter with these strange kids most of these people felt so scared and terrified they would rush to the phone and call the police.

As for the people who said yes and let these kids inside, well, we will probably never hear from them again. This story was just so creepy that it blew up all over the news, social media, you tube etc.. as people were extremely fascinated with these kids, and I am one of those people. 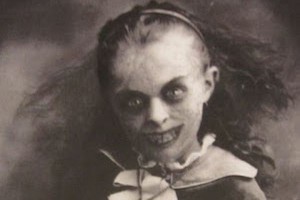 According to the report a man and his young wife were waiting for the train when they started hearing a young girl laughing in the dark tunnels.

Slowly the giggling got louder and out of the darkness a young girl appeared. As she approached the man and his wife noticed that this girl had no white in her eyes, it was just pure black. After seeing this they ran away as fast as they could. The man and his wife were so scared by this encounter they wanted the people to know what they saw, they wanted the world to know that the black eyed kids are real!

Imagine if you came face to face with a young girl or boy who had black eyes, I am sure you would be terrified, I know I would.