Today I want to talk about the very bizarre UFO sightings known by many as the flying eggs. In 2010 during a training flight in Minnesota 2 pilots were very surprised when they realized that there was another aircraft on their local frequency. But there were no other aircraft flying at that time within that area. And this really puzzled them. Then a couple of minutes later they saw a very strange egg-shaped craft flying right towards them. So these 2 very shocked pilots tried to make radio contact with this mysterious craft but they got not reply. Now these pilots had never seen anything like it before so they contacted the airport tower to let them know that they were looking at an unidentified flying object. And at this time they were very close to the airport so the people within the tower went to the window to see if they could spot this craft. And they did and they were just as shocked as the pilots. And it was also not showing up on their radar. Now these pilots were able to watch and observed this strange egg-shaped UFO for at least a couple of minutes. And they didn’t think at that time that it was alien in nature, that didn’t even cross their minds. They thought that it was a home-built, ultralight aircraft that was probably capable of seating 2 people. It wasn’t until later that they finally realized that they might of just encountered something from another world as throughout the centuries there have been tons of documented sightings of flying egg-shaped crafts way before planes were ever invented. But it does make one wonder could it be possible for someone in this day and age to make a craft like this all by him or herself in their garage or in their backyard. 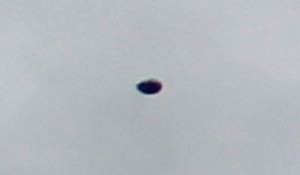 Another documented Egg shaped UFO sighting happened in 1904 by an American navy ship called the USS supply. One night a lieutenant and 2 of his men where standing on deck when they noticed something strange in the sky. And as these men just stared wondering what this could possible be they realized that they were looking at 3 flying crafts. And this is way before airplanes were a common site in the sky, especially over the ocean. The lieutenant stated that there were 3 illuminated egg-shaped crafts flying in prefect formation. And these men just watched these crafts in complete disbelief for about 3 minutes until they finally flew away back into the night sky at incredible speeds. And this is one of the first documented UFO sightings coming from the US navy.

Another very strange encounter happened in 1988 when a man coming home from work noticed something floating in his backyard. So of course he wanted to go investigate to see what the heck this thing was. And what happened next was something right out of the x files. This man claimed that he saw a 3 foot tall egg-shaped being. He didn’t believe that it was an aircraft or anything like that. He believed that it was a living thing, all though it had no head, hands or feet. And this man stated that it had very strange looking skin and that it’s skin was moving. He also noticed that it was kind of illuminating. Then it lifted off the ground about 30 feet or so and slowly started to move. So this man ran back into his house, went to his window and just watched this thing in complete shock as it was just cruising down the street. Now at that time he did not want come forward, he did not want to tell anybody about this as he was afraid that people would think that he was completely nuts. But eventually just like most people who come face to face with something that they just can’t explain he did come forward. And his story did make some UFO experts wonder could some of these egg-shaped UFO’s actually be living extraterrestrial beings?

Another very interesting sighting happened in 1957 in Mississippi when a truck driver called the police to let them know that there was an egg-shaped craft blocking the road up ahead. And if that wasn’t strange enough he also said that he saw with his own eyes 3 alien beings coming out of this craft and that they were making a very strange chattering sound. But sadly by the time the police got there they were gone. There is also another very similar case just like this that happened back in 1954 in Venezuela. A man named Gonzalez and his friend Jose were just cruising along the highway one day having a good old time when all a sudden a very large egg-shaped craft landed right in front of them. Then they saw 3 very hairy humanoids coming out of this craft. Now instead of being scared out of their minds and getting the heck out of there like most normal people would. Gonzales was actually very angry because these aliens were blocking the road. So he got out of his truck and he ended up getting in a fist fight with them. He stated that they were very light but extremely powerful. Now the interesting thing about this case is that there was also a police officer who claims that he had also seen this happen. But he was just way to scared to do anything about it. And I have covered this encounter in a lot more detail in my weirdest alien encounters of all time part 1 video series. Now there are just so many different type’s of alien crafts from the legendary flying saucers, to the triangles, the cigar shaped UFO’s, the flying eggs and many, many more making us paranormal junkies wonder just how many alien species are visiting our planet.