While I was working on skinwalkers part 2 I stumbled upon a crazy sighting coming out of Africa and I wanted to cover it real fast. And just so you guys know Bigfoot sightings in Alaska and skinwalkers part 2 will be released soon. Now a couple of weeks ago in Ghana Africa farmers started to notice that their livestock was getting killed and eaten by a mysterious predator. The way these animals were being attacked was just very odd and unusual as sometimes only the liver would be eaten or it would just be the heart or the intestines. Just some random body part so this made no sense at all as this is not how a predator attacks and kills its prey. 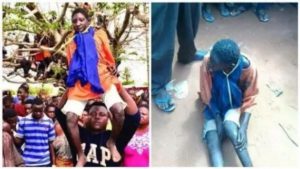 So everybody within this area was scared and on the lookout while hunters were trying to catch or kill whatever this was. Then eye witnesses started to come forward and they were saying some very strange and terrifying things. They said that they had encountered a shapeshifter. On several occasions villagers claimed that the had seen this entity turn into a pig or some random animal and once it realized it was being watched it would run after them then it would just disappear. And these stories only created more hysteria among these people. Then not to long after these sightings a hunter saw it, he claimed that he watched this shapeshifter turn into a human then back into a wild animal and he shot at it then it sprouted wings and flew away. And I guess this hunter must have wounded it as it didn’t get far. It landed on a nearby farm and the police were able to catch it thanks to a witch doctor or a man who knew how to stop it from changing forms.

Now the interesting thing about this case is even the police claim that they had seen it shapeshift several times before it finally stopped in the form of small man and this man can’t speak. And it seems that the people within this region believe that this is not a human being at all but more like an entity or a magical creature. Now personally I think that this is just a case of superstition mixed in with a little bit of hysteria. But one thing is for sure the people who live here believe without a shadow of a doubt that this man is a shapeshifter. And that does scare me because I don’t want anything bad to happen to this person as it seems since he can’t talk that he might be special if you know what I mean. And maybe they are targeting him for being a little bit different. Now I try to never rule anything out as I do believe in the paranormal but when somebody’s life is in danger do to superstition and hysteria I do hope that the government steps in and protects this person. But if it turns out that he or it is a shapeshifter well that would probably change everything as I am sure that we would never see the world the same way ever again.

There is also another very strange case that happened almost a decade ago when police were on patrol in Nigeria when they spotted 2 men trying to steal a car. And once these men saw the police they ran away as fast as they could and while the police were in pursuit they claimed that one of these men turned into a goat, and they actually stopped and arrested the goat for suspension of armed robbery. And there was even an official report stating that a goat had just been arrested. So people came from all over to get a glimpse of this goat or shapeshifter as some believed. Now I am guessing that the police were hoping that the goat would turn back into human form while it was behind bars but it never did. So eventually it was released. But it just goes to show how superstitious some parts of Africa and the world still are. Making me wonder if these stories and legends about shapeshifters and other magical creatures that have been passed down for centuries come from some sort of truth as I do believe that there has to be a reason for their beliefs.