In my last video I talked a little bit about the black knight satellite and after I released that video I got a lot of request to make a more detailed video about it. Now this alien satellite conspiracy theory all started In 1998 when NASA took a photo showing an object floating in space. And they claimed that this object was nothing more than space debris, a thermal blanket that was lost on a previous mission. But a lot of people were not buying that statement because this object did not look like a thermal blanket, to them it looked like some sort of craft. So people started to believe that maybe this was some sort of alien satellite, and there is some interesting alleged evidence that helps fuel this alien satellite theory. In 1954 a marine corps naval aviator told the public that the U.S Air Force had detected two satellites orbiting earth. And that statement really shocked a lot of people because at this time we, mankind didn’t have any satellites orbiting earth. Then way before this 1954 statement from a marine aviator Nikola Tesla claimed that he built a device that was capable of listening to alien radio waves. And he once told a reporter that while he was experimenting in Colorado with this device he believed that he actually got evidence that there was life on mars because he intercepted a mathematical radio signal coming from outer space. Now I am not sure why he believed that this signal was coming from mars but many now believe that this alien signal was coming from the black knight satellite, not from mars. And Tesla isn’t the only one, in 1899 other scientist also claimed that they too had detected radio waves coming from outer space. 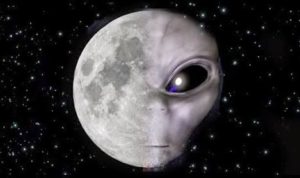 Then in 1960 Time reported that they had detected a satellite that was in a polar orbit around the earth. And this report got a lot of people talking because at that time in the 60’s there were know known satellites that were in a polar orbit. And because of all the attention that this report received the Defense Department made an official statement stating that this object was space debris, a part of the Discoverer satellite that broke off. But the Defense Department never did prove this making a lot people think that the government was hiding something. Now most likely this was some sort of top-secret military satellite but some believe that this is just more evidence that the black night satellite is real. Now after researching this black knight satellite theory I was very surprised at how little information and alleged evidence there is.

I think that people just saw that this object in the 1998 NASA picture had to be some sort of craft made by something intelligent. And since it wasn’t made by us, it must have been made by aliens. And that’s all it took for this black knight satellite theory to take off. And for all we know it could be true, maybe it is an alien satellite. But I personally believe that if aliens are spying on us they wouldn’t need a satellite, they would just use the moon. And many astronomers going back since the telescope was first invented believed that there are aliens on the moon. Many of these early astronomers have stated that while they were observing the moon with their brand new telescopes they could see things flying, formations seemed to just appear or disappear overnight, bright lights, moving bright lights and many, many other strange anomalies. Now if aliens are in fact spying on us maybe they realized that we could now see the moon and they stopped their surface lunar activities, or maybe they just moved to the dark side of the moon.

And during the Apollo 10 mission the astronauts said that they heard some strange music while they were orbiting the dark side of the moon. One of these astronauts said “Man this is some weird music” and another said, “we’re going to have to find out what this is. Nobody will believe us.” And after they reported this back to NASA it was believed at that time that what these astronauts heard were radio waves interacting with the moons magnetic field. But scientist disagree with that theory because the moon doesn’t really have a magnetic field, it’s just extremely weak. So if this music was not caused by radio waves interacting with the moons magnetic field well, what caused it. And there was also a lot of strange stuff going on during the Apollo 11 mission and NASA claims that some of the Apollo 11 footage was lost. But most people are not buying that, they believe that NASA is trying to cover something up. Even the crew claimed that they saw a UFO while they were walking on the moon’s surface. And also why have we never gone back to the moon? Now I am sure we have but just not officially.

Then we got all these structures on the moon that appear to be made by something intelligent. And there are many, many more interesting photo’s. Now to me it makes perfect sense that if aliens did exist, and they knew that we existed, and they could get to us the moon would be a perfect base for them. And I do think that the government, NASA is hiding something from us. As to what it really is we can only wonder and imagine.