When I released my last Bigfoot video, Bigfoot in Alaska I went over a couple of stories about Bigfoot swimming. And that really supersized me as most apes especially the larger ones don’t like to get in the water. So that made me think that if Bigfoot does exist then maybe it’s a lot more like us then we think. And right after I released that video I stumbled upon this article and I found these other sightings to be extremely interesting so I wanted to share them with you. One of the earliest known encounters of a Bigfoot swimming happened in the 1830’s when people in Indiana saw what that thought was a person swimming in Fish Lake. But when they got a better look they saw that this person was covered in hair, was only about 4 feet tall and just looked really different. But they still believed at that time that it was a human but a wild human. And they called him or her a wild child. And many people claimed to have seen this wild kid in this lake and around this area during this time period. Now about 100 plus years later Bigfoot researchers stumbled upon this mass sighting of this wild human. But they don’t believe that it was a wild human, they believe that it was a Bigfoot child, according to the eye-witness descriptions. Another very famous encounter happened in Washington in 1967 when a fishermen was pulling in his net when all a sudden he felt a very powerful tug. And the fishing net ripped right out of his hand. So the fishermen ran to go get his flashlight to see what or who did this. And when he shined his flashlight in the water he a saw a very hairy man like creature swimming away with his fish. Now not only was this man shocked by what he was looking at he was also pissed because this creature just stole his dinner. 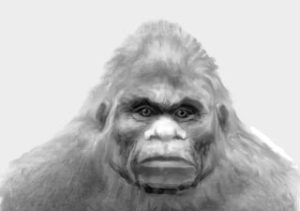 Then in 1965 a man in British Columbia was out fishing in his boat when he saw something rather large swimming in the water. And this man just stared and wondered what could this possible be. Then he noticed that whatever this was, was swimming right towards his boat. Now at that time he thought that it might be a person and maybe this person wanted to have a chat with him or something. But when this thing got closer he saw that this was no man, this was an ape and it was extremely large. So scared out of his mind he started his boats engine and he got the heck out of there. And as he was getting away he saw more of these large apes standing on their legs on the shore line. Now once he got home he finally realized that he had just seen a group or a family of Bigfoots. Another very famous encounter happened in Texas when a man named John heard some sort of disturbance going on, on his porch one night. And when he went to go investigate he saw something rather large take one of his rabbits and take off back into the darkness of the forest. So John very unhappy followed this thief who he assumed at that time was a homeless man. But once he got to trinity river he was able to got a better look thanks to the full moon. And John claims that he saw a very large, very hairy ape human like creature swimming in the river against the current. He also saw that this thing was still holding on to his rabbit. So John amazed by what he was looking at just stood there staring in total disbelief and also scared to death. He was never a believer in Bigfoot until he saw it that night with his own eyes.

Another very interesting sighting happened over at crater lake when a man was cooking breakfast at his camp site when something caught his eye in the water. And for whatever reason this man was very curious as to what this was. At first he thought that it was a bear but when he looked closer he realized that this was no bear but some type of very large ape. Then this creature get out of the water and lied down on the shoreline as if it was trying to dry off. And this man stated that he was able to observe this creature for some time before it walked off like a man into the forest. Then In March of 2007 a family was having a very nice day at the beach in Northern California when they claimed that they saw a Bigfoot swimming in the water with the sea lions. And it seemed that this Bigfoot was not at all bothered by the sea lions or the cold water. And this location is not that far away from where Roger Patterson and Bob Gimlin filmed the most famous and controversial Bigfoot footage of all time known as the Patterson footage. Now I am very glad that I stumbled upon these sightings because now I know that Bigfoot seems to like swimming in the water. And if I was trying to find proof of Bigfoot it might be a better idea to stake out the shorelines or the lakes instead of the forest. As that way I would be able to get a clearer view of what I was looking at. And just maybe finely get that undeniable evidence that thousands of people have been trying to get for hundreds of years.