In May of 2011 a F3 tornado hit Joplin Missouri. And this huge tornado was responsible for 161 deaths. And after the smoked clear many survivors, mainly children started to tell some pretty amazing stories. In one case a mother and her daughter had to leave their vehicle and run for there lives as this huge tornado was directly on that roads path. And while they were running for their lives the tornado started to move towards them. And the best they could do was just hit the ground and hope and pray that they would somehow survive this. And it seemed to the mother that this F3 tornado was right on top of them. But yet nothing happened, they were perfectly fine. And when the mother looked at her 3 year old daughter her daughter had a very odd smile on her face. And she said to her mother weren’t they pretty. And the mother replied who, who was pretty. Then the daughter said the butterfly people. And then she told her mother that these butterfly people saved them. Then not to far away from this a father and his two young boys were trapped outside when the tornado hit. And the winds coming from this tornado were so strong that the soles of the fathers shoes ripped right off. But yet the father and his two sons didn’t get hurt, they didn’t even get mildly injured. And the father couldn’t make any sense of it. And later on his two young boys told him that they saw tiny people with wings that looked like butterflies hovering over them. And they also said that these tiny flying people were protecting them. 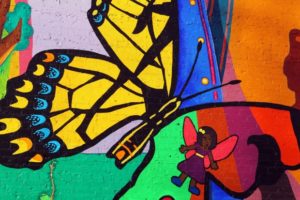 Then a 2 year old girl and her father got caught in the tornado while they were in their car. And they survived which is not to uncommon depending on how far away they were from the vortex. But later on the 2 year old told her dad that there were butterflies in the car with them. And once the tornado passed these butterflies disappeared. And this 2 year old also said that they were awesome. But it wasn’t until later when everybody in town started talking about these miracles and these butterfly people did he finally realize that maybe that is what his daughter saw. And maybe they did save them as the father did think that the were going to die. Another very similar case happened when a young boy and his father where in their vehicle when out of nowhere this tornado struck. And they got tossed up by these extreme winds. And while they were in mid air within their vehicle they saw another car flying right towards them. And right before it was about to crash into them it just stopped as if something was holding it back. And somehow they all survived. And the young boy told his father that he had seen not a small angel but a huge angel holding the other car back. Now the father didn’t see any angels, but he did witness the miracle making him believe that something paranormal, something unexplainable did save them.

Then at a church people were gathering for mass when they were told that they needed to go into the basement as a tornado was approaching. Then this tornado slammed into the walls of this church and these 4 massive walls crumbled and fell through into the basement trapping all these people. Then six very large men arrived out of nowhere and they were able to lift up these massive walls all by themselves so everybody could escape. Then these six very large men just kind of walked away. And when the rescuers arrived they were shocked by this story. And they stated that there was just no way that six men, no matter their size could have lifted up this massive walls up all by themselves, as it’s just impossible. But all these eye witness swear that this did happen. Another amazing case happened when a sheriff spotted a 4 year old boy in a field in the middle of nowhere just east of Joplin. So the sheriff got out of his car and ran to this boy to see if he was ok as at that time he was expecting the worst. But to his surprise the boy was perfectly fine, he didn’t have a single scratch mark on him. So the sheriff asked him if he was ok, where are you from and how the heck did you get here? And the boy replied that he lived really close to ST. Johns hospital. And that was in West Joplin where this F3 tornado had just hit a couple of minutes earlier. And that was about 6 miles away. And the boy also told this sheriff that he was picked up by Angels and they flew him to this location then lowered him down into this field. Now there was just no way that a 4 year old boy could have walked to this field all by himself. Making this one of the most bizarre and credible cases of these angels or butterfly people.

And there are a heck of a lot more stories just like this. But do to the fact that this is a very religious town some skeptics believe that these people might just be making up stories. But for the ones that were there and had witnessed these miracles first hand believe that something Divine did happen. And just maybe all these kids really did see these angels and these butterfly people. Making us agnostic and atheist wonder if god really does exist?

11
SHARES
FacebookTwitter
« Is The Houska Castle A Portal To Hell?
The Mannequin In The Window »

2 thoughts on “Strange Sightings Of Butterfly People In Joplin Missouri”