Before I start this video I would like to apologize for the re uploads that I have been doing lately. The good news is I don’t have that many more left and I will slowly upload those over the next couple of months. And YouTube is trying to fix this so hopefully this madness will be all over soon. 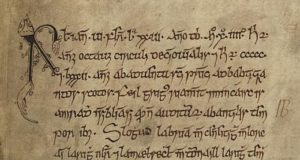 Now I love when I stumble upon just the strangest stories. And this next case is one of those coming from messagetoeagle.com. According to an ancient Norse manuscript “The Kings Mirror” something very bizarre happened on a Sunday in Ireland in 950 AD. While everybody was attending mass in a small Irish town they heard a very loud bang, something very big had hit the church. So the people scared and panicked ran outside to see what had caused this. And to their shock and surprise they saw that a huge metal anchor tied to a rope had fallen from the sky and hit the church door. And when they looked up they saw a boat flying right above them. And it appeared to them that this boat was flying or floating on an imaginary ocean. They could also see men and women leaning over the railing of the boat. Then a sailor on this flying boat jumped overboard and dived into the air, but it wasn’t air for him, it was water.

And this diver slowly floated or swam down to the ground and tried to free the anchor that was stuck in the church door. Now the people surrounded this diver and just watched in complete amazement and some of them even tried to capture him. But the priest told them to get back and not to touch him. Now it appeared that this person or whatever he was could not see them or their world. And after this diver struggled for a good while to try to free the anchor he gave up and floated back to the boat. Then they cut the rope attached to the anchor and sailed away. And these church going people believed that they had just witnessed a miracle. And according to this legend the anchor stayed in this church door for centuries. But as of today nobody has ever been able to find the town mentioned in the manuscript or the anchor.

Now this is not the only case of a floating ship or airship in Ireland. Just 6 years later in 956 AD there was another encounter above a market fair. While the people were enjoying a beautiful Irish day a ship appeared in the sky, just like the previous sighting. And these terrified people saw a human figure throw a spear into an imaginary ocean as if he was trying to catch a fish. Then he jumped off the boat and floated down to retrieve something. And when he got to the ground the people at the market grabbed him. Then the diver said let me go I’m being drowned, so the people let him go. Then he floated back to his boat then the boat disappeared back into the sky. But before he got back onto the boat the people at the market yet again could see men and women looking over the railing on this flying boat and they were laughing at the diver.

So I am not sure if they could see the people down below in this sighting or they were just laughing at the diver because he was having a lot trouble. And maybe the diver thought that he had encountered some sort of underwater ghost. That’s of course if you believe in this ancient Norse manuscript. Now whether you believe if these ancient legends are true or not I do believe that they have to come from some sort of truth, some sort of sighting. I don’t think they were made up just out of thin air. Now about a year or so ago there were reports about people seeing floating city’s in the sky’s throughout the world especially in China. And I did make a video about it. 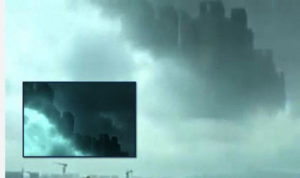 One of the most interesting cases in that video happened in Nigeria. One morning a man was working in his tea shop when he noticed a very bright light sky. And this man was awe-struck by this light as it was nothing like he had ever seen before. Then he noticed a strange cloud forming under this light and it was moving right towards him, and it was also very low for a cloud. Then he saw the most amazing thing. He claims that on top of this cloud or rather in this cloud was huge city filled with marvelous looking sky scrapers. And not only was he able to see this city he could also hear it. Then not to far away from this sighting a farmer was getting ready to go to work when he too saw this floating city. And he also claimed that he could see these amazing sky scrapers. One of the most interesting accounts coming from this mass sighting comes from a young boy who told his parents that he saw a massive city floating through the trees. Not above the trees but through them, as if it wasn’t physically there but yet he could clearly see it. Now if this was just one person I am sure we wouldn’t think to much about it. But pretty much everybody that lived within this town saw this amazing divine like city floating in the air. And most of them who were close enough could also hear it, the sounds that one would expect to hear when there in a big city.

Now there are a lot of sightings throughout the world very similar to this, especially in the past couple of years. And some believe that they are nothing more than a an illusion brought on by different air temperatures that can bend rays of light. And just maybe global warming is the cause for the increase in these type of illusions. But of course that can’t explain some of these cases, especially what happened in Nigeria and Ireland. So some believe that they are inter dimensional beings, and some say that they are Jin. Now whatever the case maybe this is one amazing paranormal mystery and one I will definitely do a lot more research on. And if I find any more sightings or any new theory’s I will let you guys know.