On Britons 2nd largest mountain in Scotland there have been some very strange and creepy sightings of a Bigfoot like creature going back for centuries. And the locals call it the Big Grey Man. One of the first famous encounters happened in 1891 when a noted climber J. Norman had a terrifying experience while he was climbing this mountain. While Norman was walking along he started to hear a loud thump behind him. And at first it was faint, but then it started to get louder and louder. And he noticed that every 3 steps he would take there would be one loud thump behind him, and it was getting closer. Now do to the terrain and the fact that he was surrounded by mist at the time he couldn’t really see anything, but he knew that something was there and whatever this was, was very big, walked on two legs and it was following him. So he started to get really scared and eventually he couldn’t take it anymore, he was terrified so he started to run. And at times he would take a break behind some boulders, look back to see if he could see anything but he never could. And when he finally made it to the bottom of this mountain he was very thankful to be alive, he was convinced that something very large was stalking him and he swore that he would never go back to this mountain alone. Now Norman didn’t tell anybody about this or at least not publicly until about 30 years later. But when he finally did a lot more people and experienced climbers just like him started to come forward with their encounters on this mountain. 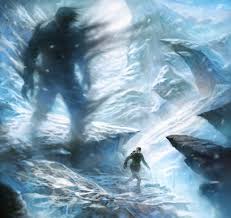 Not to long after Norman told the world about his terrifying experience he received a letter from a Dr. Kellas. Dr. Kellas told him that one day he and his brother Henry were really close to the summit. And when they stopped to take a break they saw a huge giant figure approaching them, and this creature was just so big that it scared them to death. And Dr. Kellas and his brother didn’t even communicate with each other, they just started to run. And once they finally got to the bottom of this mountain they, just like Norman were very thankful to be alive. Now they knew that this couldn’t have been a man, it was just to big. They believed that whatever this was, was something still not yet documented by science. And since this happened in the early 1900’s nobody in this part of the world really knew about the Yeti, Bigfoot or Sasquatch. Making many believe, many years later that this must have been what they had encountered.

Another encountered happened in 1940 when a man was camping at the summit. And in the middle of the night he woke up and saw something very large and brownish right outside the opening of his tent. And this man was horrified, he froze, and he hoped and prayed for this thing to just go away. And when it finally did he got out of his tent and saw in the moonlight an enormous creature walking away. And he believed that this creature was about 20 feet tall. Now I have never heard of a Bigfoot being that tall, but this man did basically describe a Bigfoot. He stated that it was a hairy brown creature that walked similar, but not identical to a human. And that it also had a had a terrible stench and was extremely broad. He believed that if this thing wanted to it could easily snap him in half.

Another encounter happened in the 1990’s when a group of three men saw a large dark human shaped figure run across the trail about 200 yards ahead. And all though it wasn’t clear what they actually saw they all felt a feeling of dread, but nevertheless they still kept moving forward. And when they reached the point where this thing had crossed they heard something to the right of them. And when they looked they saw a face staring right at them and whatever this was, was not human. And just like all the others they were terrified and they got the heck out of there. Then about three weeks later when they were not even on this mountain these 3 men claimed that they had another encounter with this, or maybe another similar creature. One night while they were driving they saw it come out from the side of the road and start to follow them. And they said that it was capable of running up to about 45 miles per hour. But after about a minute or so it stopped and gave up. And these men now started to wonder if this creature was stalking them.

There was also another famous case when a man claimed that he had actually shot at it while he was climbing the mountain. But he must have missed because he never could find a body or any blood on the ground. Then in 1965 a group of hikers stated that they stumbled upon some huge tracks that measured to be about 14 inches long and that these tracks were about 5 feet a part. So if this was real and not a hoax whatever made this must have been huge with a very long stride.

Now there are also a lot of other things other than a Bigfoot like creature being reported on this mountain. Some claim to hear ghostly music and voices speaking in unknown or maybe an ancient language. And all though they can hear it very clearly they never can find the source. Some claim that while there hiking here they get an overwhelming feeling of fear and dread and they feel that they need to just get off this mountain. Now the most common reports are from people hearing loud footsteps right behind them. And on a lot of these occasions it would be a perfectly clear day, no mist, no clouds, no place for anything to hide, but yet there is nothing there. And these hikers that witnesses this phenomena do get really freaked out. And they truly believe they are being followed by something very big. And these reports are interesting because I have covered some Bigfoot sightings where eye witnesses swear that had encountered a Bigfoot. And while they are just staring at this Bigfoot, in total disbelief they claim that it also just disappeared right in front of their eyes. And a lot of people do believe that the Bigfoot, Yeti or Sasquatch are spiritual creatures. Now there are just so many paranormal things going on at this mountain and I hope that one day I will get to go here and hopefully do an investigation of my own!