I would like to thank J.T for bringing this next mystery to my attention. Now many researchers believe that this case has been solved but it’s just a theory and we will talk about that later on in this video. On the 26th of December, 1900 a ship was making its way to the Flannan Islands off the east cost of Scotland. Its destination was the Eilean Mor lighthouse. Now except for the lighthouse keepers this island was uninhabited and captain James Harvey was going there to bring them supplies as well as a replacement lighthouse keeper, Joseph Moore. And when they finally made it to this island they were surprised when they saw that no one was waiting for them on the shore. Which was very odd. So the captain blew his horn and he also shot a flare into the sky but yet still no response. So the captain worried decided to send Joseph to the lighthouse to go investigate. And when Joseph was walking up the stairs leading to the lighthouse he started to get scared and he couldn’t explain why, he just got an overwhelming feeling of fear and dread. And once he got to the lighthouse he knew right away that something was wrong because the door was unlocked, 2 of their coats were not there, there was half eaten food on the kitchen table, an overturned chair and also all the clocks had stopped working. 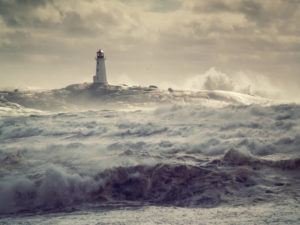 Now Joseph after a lot of searching found no trace of the missing lighthouse keepers so he went back to the ship to inform the Captain. And then the Captain ordered a search of the entire island in hopes of finding these missing lighthouse keepers. But after a long search there were still no signs of them. Then the captain sent a telegram to the mainland that read ‘A dreadful accident must have happened at Flannans. The three light house Keepers have disappeared from the island. On our arrival there was no sign of life to be seen. I Fired a rocket but there was no response.’ Now the captain believed at that time that they had either been blown over the cliffs, which I don’t agree with as why would they been standing next to a cliff if there was a chance that they would be blown over. And the other theory was that they had all drowned trying to secure a crane, or something like that in the middle of a storm. And that is what many researchers believe had happened and that is why they say there is no real mystery here. And maybe they are right, but according to the logs the storm was over and there was some strange things going on within the lighthouse before they vanished never to be seen again.

One of the lighthouse keepers wrote in their logs that they had never witnessed winds like this before. And he stated that the main lighthouse keeper was acting very odd and was extremely quit. And the tough guy of the group had been crying. And it appeared that he had been crying because of this very powerful storm that they were witnessing. And they were also praying for this storm to end. So it was pretty clear that these lighthouse keepers were very scared. Now why would 3 grown men be scared of a storm especially when they were perfectly safe within the lighthouse. And here is where things get a little bit creepy as according to local reports there were no known storms in this area during the time when these logs were written. It was reported that the weather was perfectly fine and calm. And in their last entry they wrote ‘that the storm was over and that God is over all.’ Now that is something very strange to say and nobody then and know really knows what they truly meant when they wrote that, “God is over all.” But one thing is for sure these 3 men were terrified and they were very relived when whatever they were experiencing was over. And the theory that they were all swept away out to sea because of a storm doesnt really make any sense since they wrote in their logs that the storm was already officially over.

Now there have been some very creepy reports over the years on this island such as strange lights in the sky and on land. And visitors stating that they had heard voices in the wind. And in the past before this lighthouse was ever built the nearby local people would never stay on this island at night because they were afraid of the spirits. So this location does have paranormal reports. Now I completely disagree when researchers say that this case is solved because that is simply not true, it’s just another theory. And when you take into account the logs that were written before they disappeared something very strange was going on, on this island. And I don’t think that we will ever know what really happened to these men.

4
SHARES
FacebookTwitter
« Did The Owners Of A Texas Cafe Capture Footage Of A Ghost?
The Legend Of The Gigantic Worm That Terrified Scotland »