Something very strange is going on in Derbyshire County in the United Kingdom. For the past couple of weeks residents here have been reporting to the authorities that they have seen a large mysterious ghost plane or ghost planes flying over head. Then somehow they just vanish right into thin air. And they also say that when they see these ghost planes the sky gets very dark, then once they vanish the sky returns back to normal. 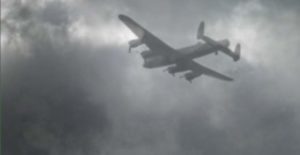 Now the interesting thing about this case is it’s not just one, two or three people. This was a mass sighting and pretty much all the reports are identical. One women stated that while she was driving with a friend they both saw a plane flying very low, it was so low that they thought that it was going to crash. Then another plane flying just as low was right behind it, then they both just vanished. Another eye-witness stated that he also saw 2 planes flying extremely low and he thought that they were either going to land or crash because they were almost touching the tops of the trees. And these trees are not California redwoods, they are not that tall. He also stated that they were making no noise at all. And as he was watching wondering what the heck was going on he also noticed that the sky started to get very dark and that there was nothing blocking the sun. So this sighting really freaked him out. And there are many, many more eye witnesses and they all basically describe the exact same thing. And before these planes disappeared right into thin air they felt as if the 2nd plane was chasing after the first one. And they described these planes to be old World War 2 planes.

Now since there were just so many sightings the Royal Air force did respond to this and they said that they were doing training exercises within this region and that the planes were huge transport planes. But a lot of people are not buying this because they don’t believe that the Royal Air force would run exercise that low over people’s houses, it just doesn’t make any sense. Plus that doesn’t explain why there was no noise coming from these planes or how they could just vanish right into thin air.

Now oddly enough this location is known as the U.K.’s Bermuda triangle. There have been 50 known plane crashes within this region and over 100 people have died as a result. But the really interesting thing about this case is these ghost plane sightings have happened before. Another sighting happened on August 3rd in 2015 when 2 local residents were driving down the A6. While they were driving with their windows down they claimed to have seen an old World War 2 plane flying right over them. And it was so low they believed that they could almost touch it with their hands. And they said just like the others that there was no sound at all and they also believed that it was about to crash, but then it just vanished. They also stated that they thought that it was a Lancaster, a four engine heavy bomber that was used during World War 2. Now not to far away another person also saw this plane and he stated that it was in fact from World War 2 but it wasn’t a Lancaster, it was a Liberator, an American four engine B24 bomber. And he also stated that he too thought that it was about to crash, but then it just disappeared. Now there were no airshow or anything like that going on at the time. So there is just no way that an old American World War 2 bomber would just be flying over England, well at least not without anybody knowing about it. And one of these eye witnesses was 88 years old and he was actual in the Royal Air Force during the war and he confirmed that it was an old World War 2 American bomber.

Now the most famous ghost plane sighting that happened in this region occurred on March 24, 1997 when a plane was seen by dozens of people about to crash into a moor. And since so many people called the police to let them know that a plane had just crashed the authorities quickly got together 100 search and rescue volunteers. But after hours and days of searching they never could find a plane, there was just no wreckage anywhere. And these eye witnesses were really freaked out, they didn’t understand what was going on because they clearly saw that a plane was about to crash. Now this is one of the most interesting mass sightings that I have ever covered on this subject because there are just so many eye witnesses over different time periods. Making many believe that something paranormal is going on here as there is just no way to explain what these people have claimed to have seen. Making this a very interesting and just down right terrifying case.