I love covering these ancient giants mystery and the other day I was watching the science channels unexplained files and they told a very remarkable story about giants. Now not that long ago a farmer claimed that he had stumbled upon an ancient site in the lesser Caucasus mountains in Georgia. The farmer said that he had discovered an ancient stone crypt and he came across two giant human skeletons sitting on chairs around a very large table. Now throughout the world there are many locations were it is believed that giants once lived. And Georgia is one of these locations. And some Georgian researchers heard about this discovery and they wanted to go see if it was true. So off they went deep into the mountains hoping that they would be able to find this ancient site, and they did. But sadly the crypt had collapsed and it was now filled with soil and just tons of debri. Now these scientist now knew that this farmer was telling the truth, well at least in regards to this ancient stone structure. But it did make them wonder could there actually be giant human skeletons under this debri, so they started to dig. 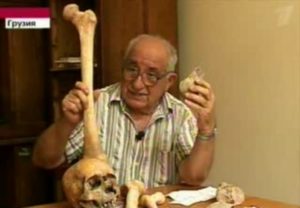 And not to long after these archeologist started digging they did find bones and these bones were huge. So the team took some samples and they returned to the Georgian capital. And these samples were presented to a very famous and very well respected scientist and I am sure I am not going to be able to pronounce his name right so I will put in text. Now this world famous scientist said that if these bones were human these humans must have been at least 9 to 10 feet tall. Now these archeologist gave these bones to this scientist so he could examine them and before he could come to a conclusion he died and these bones mysteriously vanished. Now I have been covering giants for a very long time and throughout the last 3 century’s there has been some very credible people claiming that they too had found giant human skeletons. And shortly after these people or archeologist had come forward these bones in every single case had also mysteriously vanished. And this is one of the most credible cases were giant bones have been found and have disappeared.

Now in 2014 the science channel stumbled upon this story and they were just blown away so they contacted all the people involved with the original dig in hopes of getting to the bottom of this. And in hopes that they could return with them to this site were these giant bones were found. And the Georgian archeologist agreed and off they went back into the mountains. Now on the way to this site archeologist and researcher Bruce Fenton who accompanied the original team noticed huge stone blocks, and these enormous blocks seemed to have been part of an ancient building. He also found traces of ancient roads and various other odd structures making him believe that there might just have been an ancient city here. And due to the fact that these stone blocks were so big it did make him and the team wonder if this location was at one time inhabited by an ancient race of giants.

Now this ancient site is said to be about 2000 years old and I believe they are waiting on permits before they can dig again. So it will be interesting to see if these permits get approved, and if they do will they find anymore evidence of these giants. Now there are also a lot of legends and stories about giants within this region. When the Greeks arrived to the Caucasus mountains they told tales of giants and one of these legend states that one of these giants was chained to a mountain because he was being punished for revealing secrets to us humans and these legends date back to about the exact same time period as this ancient site. Now Bruce Fenton is also very famous for his work in the jungles of Ecuador where he and his colleagues unearthed ancient tools that were just to big to be used by humans.

And these tools were found right next to a 270 foot pyramid like structure and this structure is made out of huge stone blocks. And some of these blocks weigh up to 2 tons and nobody really knows who made this pyramid. And the tribes throughout this region also say that giants once inhabited these lands. Now If it wasn’t for the show the unexplained files I probably would have never heard bout this discovery and that shocks me cause I am always researching the ancient giants mystery making me wonder how many more discovery’s are out there that I have never heard of.

Now this next story comes from Asia and I have been wanting to cover it for a very long time. Now I can’t really find the exact date but this legend is ancient and it comes from Northern China and Southern Siberia and it is pretty crazy. But there are some details within this legend that really stood out to me. Now passed down for eons is a story about an alien invasion. And these aliens fought and enslaved the people within this region for a very long time and these aliens forced them to build pyramids and also to mine mysterious elements deep within our earth. Then a mysterious race of 10 to 12 foot tall red hair giants showed up and basically kicked these aliens asses. Not only were these giants more intelligent than these alien beings but they also seemed to possess supernatural like powers.

And the Chinese and Siberians of that time thought that they were gods and they said that they came from the depths of our earth. Now what really stood out to me about this ancient legend is yet again these giants had red hair. In almost every story I uncover regarding giants throughout the world they always seem to have red hair and in some cases supernatural powers and extreme intelligence. And of course not to mention that they come from the depths of our earth, very similar to some of my previous videos such as the giants of Romania and the Bucegi mountains discovery where these giants also had red hair and they lived within our earth.

Until next time this is paranormal junkie. Make sure to hit that subscribe button and stay tuned.