In Linton, Scotland there is a legend of a huge man-eating worm that once wreaked havoc on a local population in the 12th century. Legend has it that this worm was about 10 to 12 feet long, it would eat anything from humans to sheep to pigs and even vegetables. Basically anything that it could find. And it lived in a nearby Loch and also within a hill where it made a lair for itself. And even to this day this hill is known as the worms den. But on occasion this massive worm would travel to the village and eat the villagers and these attacks were getting a lot more frequent. So these villagers were terrified just to go outside, for most of the day they would remain inside their houses, pray and hope that they wouldn’t get attacked. 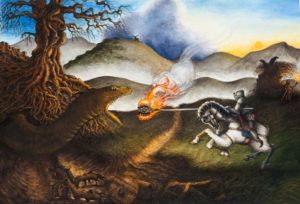 Then one day a man named John De Somerville rode into town and the villagers told him about this monster. And John told them that he would kill it for them. And the first thing that John did was head to the blacksmith and ask for a razor-sharp spear, then off he went to got find this beast. And when he did he set his spear on fire and started to attack. And after a long epic battle he was able to wound it, then it went back into its lair within the hill. Now they believed that this gigantic worm died from its wounds because they never saw or heard from it ever again.

And these villagers were just so re leaved to finally be free of this monster. And they praised this man, John De Somerville was their hero. Now some researchers believe that there still exist a sculpture to this very day of John and his heroic acts that is above a church door in Linton Scotland. This sculpture depicts a man on a horse fighting some sort of animal. So there could be some truth to this legend. But the really crazy thing about this story is that this monster wasn’t something that was on 4 legs it was a worm, a huge worm. And there has never been any evidence of a worm like this ever existing. There were some very big worms millions and millions of years ago but even then they were not big enough to eat humans.

Now the first known Loch Ness monster sighting happened in 565 A.D when St. Columba was on his way to visit the Picts. And while he was walking he encountered some Picts burying the remains of one of their dead friends. And they told St. Columba that this man had died because he was attacked by a water monster. And St. Columba was very disturbed by this story and he told one of his followers to get into the lake, he was going to use him as bait to lure this monster. And without hesitation one of his followers took of his robes and went right into the water. Then about a minute or so later this water monster surface and the Picts watching were horrified, they thought that this poor man was about to get eaten alive. But then the St. Columba raised his hands and made the sign of the cross and said “Thou shalt not go no further, nor touch the man, go back with all speed.’ And according to this legend it worked and the monster retreated back into the depths of the water. And the Picts praised this man. And this legend is in a way similar to the worm of Linton legend that happened about 500 years later.

Now there are tons of legends like this from all throughout the world, especially in Britain. And of course we will never know what truly happened but I do believe that most legends do come from some sort of truth. And even still to this day we have tons of monster sightings that do seem to be paranormal in nature. And it makes us paranormal junkies wonder, could these creatures actually exist and if they do they come from and why can’t we ever get real proof of their existence.