In a very remote valley in northern Siberia people throughout this region have been saying for centuries that this location possess some very odd and rather large metallic structures. And these structures or cauldrons must have been made by intelligent beings, either us Homo sapiens or extraterrestrials. And this location is called the valley of death as most who venture there never return. And the ones that do end up dying from some unknown illness. But despite these warnings desperate hunters and traders would and still travel through this area. And from time to time they stumble upon these amazing metallic structures. And these structures are hollow it’s kind of like a house and some of them are extremely large. So it would appear that this was some sort of ancient highly advanced city. And these hunters realized that no matter how cold it was outside it would always be nice and warm within these ancient buildings. And they also found out the hard way that if you stayed inside them to long you would get very sick and you could die from this sickness. Now theses hunters, traders or whoever was brave enough to enter into the valley of death would only ever stumble upon the top portions of these buildings. Because these metallic objects are sinking as this area is mostly a huge swamp. So we can only imagine how many of them they are as most of them are probably completely buried. 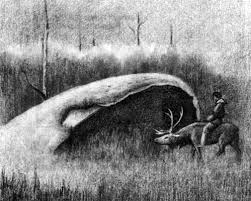 Now according to eye witness testimonies this metal is of unknown origin and even though these structures must be extremely old they look brand new. And not that long ago there was an expedition into this region to see if there was any truth to these stories. And the member’s of this expedition didn’t really reveal much they were kind of secretive. But they did confirm that they did find 5 metallic objects. And these objects were buried under the swamp. And some members of their team did get sick. Confirming that all these stories passed down over the centuries are at least partially true as these metallic structures are there. Now this expedition didn’t dig or try to enter into these objects they just wanted to see if they were real, and now we know that they are. And they did say that they were going to go back and try to cut them open so they can find out what’s inside. But there hasn’t been any further updates about this alleged future expedition. And many believe that the Russian government is now trying to keep this a secret until they know what these ancient structures are. And if it is something explainable I am sure they will let us know. But if we never hear from them ever again then we can only imagine what it is that they found. Another interesting thing is when they were asked if it was alien they didn’t comment but they did say “there is definitely something weird out there, and we have no idea what they are or what they were used for.”

Now this region is also very famous for other strange occurrences. In 1908 there was a huge explosion known as the Tunguska event. Were it is believed that a meteor exploded in mid air right over these metallic structures. And it is estimated that this explosion released more energy then 185 Hiroshima atomic bombs. But it’s still not 100 percent fact that this explosion was caused by a meteor as there is very little evidence to suggest that it was, since there is no impact crater. Now since this happened right over these metallic objects some believe that this area also possess some sort of alien defense system. And this system shot this meteor, comet, asteroid or whatever it was right out of the sky before it could hit the ground. Others believed that this is the purposes of these metallic objects, they believe that this is not an ancient alien city but an ancient alien defense system that protects us or earth from these type of threats. And as you can imagine there are many, many more theories out there as to what these metallic structures could be. Now when you look into the local legends coming from the people within this region you will uncover that these type of huge explosions have happened many times before. According to legend these explosions are not caused by objects from outer space but from the depths of our own earth. Centuries before the Tunguska event the nomads that live here felt an earthquake. And right after a huge fireball come up from the earth.

And this fireball exploded with great magnitude. And these exploding fireballs would end up killing there neighbors. And I guess they did not get along with their neighbors because they called these fireballs the friendly champions. And they believed that this was a god and it was protecting them. Now this legend just really blows my mind because it is sounds exactly like the Tunguska event that happened in 1908. And if this is story is true that means something unknown to science is going on here as I don’t think that meteors of that size would strike that many times in such a short period in pretty much the exact same location. Making this a very interesting area as not only do we have these massive explosions we got a lot of very strange metallic objects, the Siberian craters, and also sightings of mysterious human like creatures that live within the nearby lakes, which I have covered in one of my previous videos. And I am sure there are a heck of a lot more mysteries within Siberia that I have not heard about yet. Now I am really hoping that we get an updated about this future expedition as I am just dying to know what these metallic objects are and just maybe they could help shed some light on all these other out of this world mysteries that are going on in and around this location.