I just recently made a video about a family in Zimbabwe who claimed that their family was assaulted by rocks that seemed to just magically appear inside of their own home. And thanks to you, my awesome subscribers I was informed about another case that is shockingly very similar. In 1981 in Birmingham England residents woke up one night to loud bangs on the roof and in some cases to the sounds of windows breaking. So these terrified residents called the police. And right away the police found a lot of rocks all over the place. So they believed at that time that a group of kids were to blame. And the residents agreed as it was the only logical explanation, just a bunch of naughty angry drunk kids throwing rocks at their houses in the middle of the night. And since there was a lot of damage theses people were very upset. So the police took as many rocks as they could hopping that they will be able to get some fingerprints and make these kids or whoever was responsible pay for the damage and maybe do a little jail time. But the police couldn’t find a single fingerprint on any of these rocks. They also noticed that these rocks were extremely clean it was like they were polished. Making these police officers wonder if humans were actually the ones to blame. 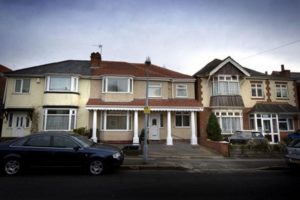 Then the next night it happened again, and the next night, then the next and so on for about 3 years. And during this time these home owners built barricades, created night watches, just did whatever they could to find out who or what was causing this. Even the police spent countless hours hiding in trees, camping out in gardens, setting up cameras, patrolling the street and even calling in ballistic experts. But in the end nobody could get to the bottom of this. These rocks just seemed to magically fall from the sky, just like what happened in Zimbabwe. The chief of police stated, “We have spent more than 1,000 man hours on this case. We are keeping an open mind about the whole thing. We don’t know why it’s gone on for so long. If we even knew the reason for it, we would be one step nearer.”

Now as time went by some of these home owners believed that this was paranormal and this case started top get a lot of attention by the press. A young women stated “It was like being stalked, as if someone was watching you. The police would leave here at 2 am and by the time they had reached the police station there would be another attack. You could hear the stones rolling down the roof. It was so weird. It always happened when you were falling asleep. It got to the point where you couldn’t sleep. You were just waiting for something to happen. It was happening so regularly. There were police everywhere. They even put a camera in one of our rooms. We were all at our wits end, we needed to sleep.”

Another eye witnesses stated “It upset the whole household. There were police everywhere, even in the trees, freezing. Windows were smashed every night by stones. Our beds were covered in glass. We weren’t fully insured, it cost us a fortune.” Now even most of the police believed that this was caused by a ghost or at least by something paranormal. As there was just no way to explain this. And still to this day after years of study, theory and endless investigations this case still remains as mysterious as ever. Some say that this was caused by a young women who unknowingly to her possessed physic abilities. Now whatever the case maybe I believe that what happened here from 1981 to 1984 is proof that some times things happen within our world that will forever remain unexplainable.