After I released the video about the Grinning Man I got a couple of messages telling me about another strange case that occurred in Glasgow, in Scotland in the 1970’s. And this entity now known as the Gurning Man is in some ways very similar to that of the Grinning Man. And all these sightings happened from 1976 to 1979 and it seems that this entity or whatever it was only revealed itself to females because there are no reports of any males actually seeing it. And these sightings only happened at night and some of these eye witnesses thought that they had just encountered a ghost. 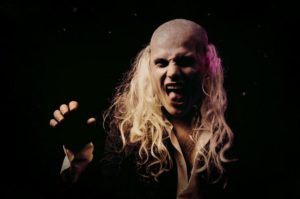 One sighting happened when two girls were walking home from a party. It was very late at night and the moon was unusually bright. And as they were walking they saw a strange man up ahead, who they later described as being in his 50’s, was bald and extremely thin. And these 2 girls were just staring at this man because he was acting very strange. And as they were getting closer they started to feel scared, a feeling of dread just came over them. And as they passed him they saw that he had the most creepiest expression on his face, and he was also grunting and snorting like a mad man. And because of his strange facial expression and by the way he was acting these 2 young girls were terrified and they just started to run. And when they looked back to see if he was chasing after them he was gone, he just vanished. And these girls believed that there was just no way that he could have ran off or disappeared from their site that fast, they truly believed that he vanished right into thin air. And the girls were just so distraught by this encounter that they decided to call the police. And to their surprise they were told that they were not the only ones to see this strange man.

Just a couple of days after this encounter and in the same neighborhood a women woke up in the middle of the night to the sounds of snorting in her bedroom. At first she thought that it was her husband but she soon realized that this noise was coming from the end of her bed. And just like the two girls this women started to feel a feeling of dread just come over her. And when she finally got the courage to look and see who this was she saw a man rubbing his chest and was grinning manically. And when she made eye contact with this man he let out a bloodcurdling scream. Then this women also started to scream. Then the husband jumped out of the bed and ran towards the light switch assuming that there must be a burglar or an intruder in the room. But when he turned on the lights he saw that there was no one there. So he asked his wife whats wrong with you? Why did you scream. And this terrified women told her husband that there was someone at the edge of her bed but when the lights came on she saw him just disappear. Now this encounter is very similar to that of the Grinning Man. And in my last video I stated that maybe the Grinning Man might be a good guy, but according to this sighting he doesn’t really sound like one to me. That is of course if we are assuming that this was in fact the Grinning Man.

Then another sighting happened when a women was putting out her milk bottles one evening. And after she put the milk bottles down she saw a man right across from her in the middle of the street jogging. But he wasn’t actually moving he was just jogging in place. And this women thought to herself that this man must be completely insane. And while she was watching him wondering what was wrong with him she claimed that he just disappeared. And this women was so freaked out by what she had just seen she too also reported this to the authorities.

Now after researching this case I could only find these 3 detailed stories but in total there were 17 reported cases of the Gurning Man in Glasgow during 1976 through 1979. And 11 of these sighting were in the street and 6 happened inside people’s houses. And all these reports claimed that these eye witnessed thought that this man was insane. And some of them were so terrified by what they had witnessed they felt the need to move far away. And since most of these eye witnesses reported that this man disappeared right in front of their eyes a lot of people believed that he must have been a ghost. But some say that this Gurning Man is some sort of entity, like the hat man or a shadow person. Now whatever the case might be this is another amazing paranormal case because there were just so many eye witnesses. And it does make me wonder if this Gurning Man is, or is somehow connected to the Grinning Man. For all we know they could be cousins.

2
SHARES
FacebookTwitter
« What Is Causing These Mysterious Sounds?
Strange Creatures The Vegetable Man »