A little while ago I released a video “The Black Flash Of Cape Cod” And after I released that video I got tons of messages saying that the Black Flash sounded exactly like Spring Heeled Jack. And I was like who the heck is Spring Heeled Jack so I started to do some research and I was just blown away by all these sightings. The first documented encounter of spring heeled jack came to light in 1808 when the editor of the Sheffield times got a letter saying that many years ago there was a famous ghost that walked and played many pranks on the living. And this strange letter also stated that this ghost or entity was able to jump extremely high and it possessed supernatural powers. And when men would try to hit this entity with sticks the sticks would go right through it or this entity would just completely vanish before the sticks made contact with it. And they called this apparition the Park Ghost or Spring Heeled Jack. Then in 1837 many years after the first known sighting a women was outside Blackheath Fair in England when out of nowhere a strange figure appeared and this figure attacked her. It tore of her blouse and scratched her stomach then it jumped away. And when she was asked what he or she looked like she said that it looked evil and that it had long cold iron tip like fingers. And at that time she believed that it was a man. But a crazy man. And when the mayor publicized this attack he got bombarded with letters stating that they too had been attacked by this person. 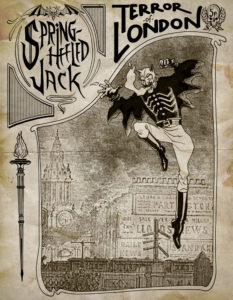 Now before this attack was publicized people who were also attacked or had seen this figure did not want to come forward with their story because they thought that everybody would think that they were completely nuts. Because what they had seen was just so bizarre, so they remained silent. But once they realized that they were not the only ones they came forward and this created a mass panic because there were so many other victims and eye witnesses. So vigilante groups were formed and they patrolled the streets non stop. And at times these vigilante groups would also encounter Spring Heeled Jack. But they could never catch him because he moved so fast and could jump over just about anything. Making many believe that this was not a man. Then one day the attacks within this town just stopped and nobody was every prosecuted, they never could find out who or what was attacking these people.

Then about a year later Spring Heeled Jack caused a lot of hysteria in London. One night a young women was walking home when someone jumped out of the shadows and breathed blue flames at her, just scaring this women to death then it jumped away like it was a kangaroo. And after this attack there were many others and these eye witnesses described pretty much the exact same thing. A tall man with scary red eyes who could breathe blue fire and would always jump, never walk or run. So everybody in London was terrified and they were on full alert. A very famous encounter happened to a woman name Jane. One night Jane heard knocking on her door and before she opened it she heard someone say “I am a police officer for god sake bring me a light for we have caught Spring Heeled Jack”. So Jane very eager to help this officer ran to get a candle and when she opened the door she saw a tall man with glowing red eyes spitting blue flames out of his mouth. And this tall man attacked her. And Jane’s sister who was in her room at the time heard her sister screaming in sheer terror so she ran outside and was able to scare this man away. And after this encounter these attacks just stopped, well at least in London during this time period.

Then in the 1870’s Spring Heeled Jack was seen all throughout the English country side and the towns people set up traps, shot at him did whatever they could to capture or kill this person but no one ever could. Now after these sightings it is believed by many that Spring Heeled Jack moved to America in 1880 as someone or something was attacking people in Kentucky. And these eye witnesses described a person almost identical to England’s Spring Heeled Jack. Such as he was very tall, had long icy cold iron like fingers, pointy ears and that he shot blue flames but not from his mouth but from his chest. Then after these sightings this person, or entity disappeared for a very long time. Then something very strange started to happen in Cape Cod in 1939 and these encounters were also almost identical to Spring Heeled Jack. But not only could this dark figure jump very long distances it could also move very fast, could levitate, disappear and reappear miles away at the exact same time. And of course these sightings of this supernatural like being created a mass panic and this entity had come to be known as the Black Flash. And no one believed that this was a human being, some even thought that it was the devil himself.

Now throughout the years there have been other sightings of Spring Heeled Jack. In 1973 a family in Canada encountered a very tall man with glowing red eyes and pointy ears. And this family stated that this person could jump 50 or 60 feet high. Then in 1979 in Texas dozens of people saw a very tall man crossing a football field in only 2 or 3 strides. And they were all just scared to death by what they had just seen. A very famous case happened in 1986 when a British army officer saw what he thought was a man jumping over very large hedges in a single bound. And while this officer was starring in total disbelief this figure approached him and punched him in the face knocking him out. And when he came forward with his story they told him that you got punched in the face by Spring Heeled Jack as this is exactly the type of attack that use to happen in England in the 19th century. And there are still sightings going on to this very day. Making us wonder could there actually be supernatural beings living in this world, such as the mothman. Now whatever the case maybe pretty much everybody who had encountered this dark shadowy figure, with icy cold fingers, glowing red eyes and could shoot blue flames out of his mouth or chest were convinced that they had encountered something unknown, something paranormal.