In my weirdest alien encounters of all time series I covered an alien sighting that quickly became one of my most favorites because it’s just so strange. Well stranger then your typical modern alien sighting. But I didn’t know that there were a lot more sightings around this time period of these tiny hairy dwarf like creatures. The first sighting which I have covered before but not in such great detail happened on November 28th 1954 in Venezuela. Just after midnight two men Jose and Gustavo Gonzalez were driving down a dark road when all a sudden they saw a very bright ball of light swaying slightly in the air in the distance. So the two men slowed down so they could try to understand what they were looking at. And they realized that this had to be some sort of air craft. Then they came to a complete stop because this ball of light was blocking the road. Now Jose was scared out of his mind but Gustavo Gonzalez was upset because this UFO was blocking the road. So he got out of his car and started to walk towards it. 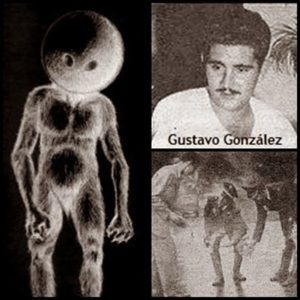 Then Gonzalez got thrown to the grown by some unseen force and when he looked up he saw his attacker. He saw a very small creature covered in hair from head to toe, he also noticed that this creature was built like a strong man but was only about 3 feet tall. So Gonzales now very scared and angry grabbed his knife and tried to stab it, but the knife wouldn’t penetrate the skin, it would just bounced off it. Then another tiny hairy creature appeared out of nowhere and blinded Gonzalez with a very strange-looking device. So Gonzales doing whatever he could to protect himself tried to fist fight his way to freedom, but these creatures were a lot stronger then him. Then more of them started to appear from the shadows with large rocks in their hands. So Gonzales scared for his life stopped attacking and Jose was just sitting in the car scared out of his mind not believing what he was actually seeing with his own eyes. Then once Gonzalez had calmed down a bit these creatures went back to their craft and just disappeared in a blink of an eye. Now Jose and Gonzalez felt that they had no choice, they needed to report this to the authorities and to their surprise they were not the only ones who had witnessed this. Not to far down the road their was a police officer who had seen the whole thing, but he was just way to scared to do anything about it. Making this one of the most strangest alien encounters that I have ever heard of.

Then twelve days later two other men were out hunting when they encountered a very small and very bright flying object not to far away from them. And just like Gonzales they were very curious and decided to approach it. And as they were getting closer they saw four very small hairy creatures get out of this craft. And one of them ran towards one of these men and grabbed him and tried to drag him back to their ship. And after a long fight they were both able to escape. And they also felt the need to report this so they went straight to the authorities. And the cops saw that these men were extremely scared and they both had a lot of scratch marks all over their bodies and torn clothing, just like Gonzalez. Then just six days later a man named Jesus was driving with his friends when he told them to stop because he needed to go to the bathroom. And while Jesus was in the brush his friends heard him start to scream and yell, something terrible was happening to him. So his friends got out of the car as fast they could and ran towards him. And to their horror and surprise they saw a very tiny hairy dwarf like creature running towards a very small UFO. And then they watched it take off at amazing speeds into the sky. And Jesus was lying on the floor unconscious and they could see that he had been attacked by this creature because he had a lot of cuts on his body.

Now these 3 sightings that happened back in 1954 in Venezuela was very unique because they were just so many witnesses, even a police officer. And this case does reminded me of another case, a very famous case known as the Dyatlov pass incident. And I am pretty sure you guys know all about this because it is one of the most famous paranormal mysteries of our time. Now one thing that really stood out to me about the Dyatlov pass indecent is one of the hikers wrote in their journal that we know now that the abdominal snowman does exist. And on that night when all these hikers died in very mysterious and just horrifying ways the native people down below saw orbs of light flying over that very mountain. And these orbs have been seen by these people since they first inhabited these lands. So we got hikers claiming to have seen Sasquatch and flying balls of light. Now that is very similar to what happened in Venezuela in 1954 as every person claimed that these tiny hairy creatures came out of or went back to a craft that was extremely bright, like a ball of light. And also the creatures looked kind of like a Bigfoot except of course they were a lot smaller. And for the most part they were kind of violent. So it does make me wonder if these 2 cases are connect and if so just what are these beings, where do they come from, what are they doing here and most of all what do they want from us.