He has no hair and is extremely terrifying to look at. That is if your lucky enough to get a glimpse. The slender man is said to be very aggressive and can stalk his prey for years. Slowly, day by day driving his victims insane. Like an evil poltergeist with no exceptions. The slender man can go wherever his evil heart desires, he has no limits, he has no boundary’s.

The people who are unlucky enough to come face to face with this unholy creature, know from there very first contact, that he is not from this world, nor this universe. A malevolent being from an unholy place that only lives to feed on our fear.

But is the slender man actually real? Is there any evidence to back up his existence. Sadly the answer is no, according to wiki the slender man was made up by a very popular website called “Something Awful”. 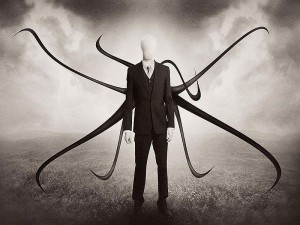 When the slender man story first saw the light of day he became very popular. All the paranormal junkies from around the world ran to you tube, Google, yahoo just to see if there was any truth to this story, anything to back up the so-called claims. Looking wherever they could to see if they can find any evidence of the slender man.

The slender man is such a dark and terrifying entity the world just needed to know, was he real? And if he was, where was the evidence. Not long after the slender man story was published on Something Awful something very odd happened. People started reporting having terrifying encounters with the slender man, even after it was proven to be fake!

So I wonder, if enough people believe in something can it come right out of our imagination and into reality? I certainly hope not.

Now with all the new slender man reports coming in, even after it was proved to be fake, people are back on the internet looking for the proof. And they might have just found it. A couple of months ago a video went viral on you tube that claimed to have captured actual footage of the real slender man. What you are about to see in the video below may shock you!