A couple of days ago I came across just the oddest story. A woman named Claudia who is 46 claimed that she and her two daughters saw a Bigfoot. And basically the department of fish and wildlife didn’t believe her. They told her that it was probably just a bear or something. And she was just so upset by this, not being taken seriously that she decided to sue them. And she also hopes that by suing them it would put pressure on the state of California to finally recognize the existence of Bigfoot. Claudia claims that her and her two daughters, ages 11 and 14 were hiking near Lake Arrowhead in California when one of her daughters became aware that something was moving in the trees. And as she looked closer she saw a Bigfoot staring right at her. So she called out to her mom and her mom said yes, yes I see it too. And they both just starred in total shock at this creature. Claudia also stated that there was more than one of them. 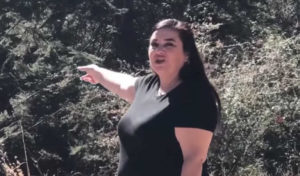 In her own words. “I swear to God, on my life, we ran into a Sasquatch. There were two creatures that were running on my daughters left hand side and then ran behind the big one that was 30 feet up in the tree. My daughter actually filmed the entire trial and I don’t why but she only filmed about 10 to 15 secs of it.” Maybe she was scared. Now I will show this footage in a second but she also said that once this creature started to sway from side to side they decided to leave it alone as it looked like it was in distress. And that statement did stand out to me because a lot of people who swear that they saw a Bigfoot say that it started to sway from side to side. And they felt like it was getting nervous or something. And also bears do not sway from side to side like how an ape would.

Now I did find this footage to be interesting. And I did see something that looked like a huge head. But just like most videos it’s not really clear as to what you are actually looking at. Now after this sighting the mother placed a call to the department of Fish And Wildlife and they did investigate. But they told her that it was just a bear and that made her very upset. She told a journalist that, “They’re supposed to be there to protect the public. They’re not doing their jobs. If I can save one life, it will be worth it. I realized when I saw this creature face to face that there’s just so much life out there that we do not know about. Life is so beautiful, and I’m wasting my years.” She also added the she lost 125 pounds since this sighting and she also decided to get a divorce. This encounter motivated her to chase her dreams and to live her life to the fullest.

Now she also left a message on a tree close to this location where this sighting happened asking if anyone had witnessed anything strange. And if so to give her a call. And Claudia claims that she has gotten some phone calls about other Bigfoot sightings in this area. So if you live close to this location I would recommend to head on out to Lake Arrowhead in California one day with a high quality camera. You never know, you might also come face to face with a Sasquatch and finally be the one to end this mystery once and for all.

Check Out The Breakdown Of The Footage Here: https://www.youtube.com/watch?v=gjSCTZWbQQM