It’s been awhile since I covered a good story about life after death. I use to cover these type of mysteries a lot because I find them very fascinating. And I just recently stumbled upon a very interesting article from the dailymail. Not that long ago an actor in England suffered a massive heart attack and was legal dead for 7 minutes. And since he was dead for such a long time they had to put him into a medically induced coma for a month to protect him from oxygen deprivation. And when he finally woke from his medically induced coma he claimed that he remembered dying and what it actually felt like to have crossed over to the other side. He stated that he knew that he was dying and he remembered trying to cry out for help. But then he realized that he was no longer attached to his body and he felt like he was in some sort of void. And even though he was no longer attached to his body he still knew who he was, he could still fill his emotions and sensations. 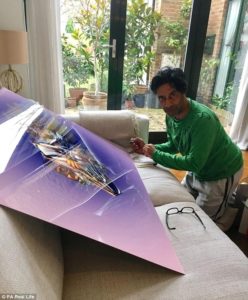 In his own words. “Despite knowing I was dead, I also knew that there was a chance of coming home. I also understood that I’d be reincarnated, but I didn’t want that just yet. I wanted to return to life, to the material world and to my wife. I demanded that I was coming back and I got my wish. I felt there was a whole set of possibilities, various lives and reincarnations that were being offered to me. But I didn’t want them. I made it very clear that I wanted to return to my body, to my time, to my wife and to go on living. I needed to be proactive. I said I was coming back. I said it as a demand not a request.” And then he came back to life. And he also described that while he was in the void he felt no weight and it was like he was swimming and he was just drifting further and further into space. He even stated at one point during an interview that he saw the moon. Now once he came back to the land of the living he started to paint what he remembered seeing. And he claims that before this amazing life after death experience he use to be a very cynical man but not anymore.

Now of course we will never know if this man is telling the truth until we ourselves die. But when someone has been officially dead for 7 minutes and then tells us there is an after life I am very interested in what they have to say. Another case happened when a women died and when she was on the other side she talked with another spirit. And this spirit told her that she and all the other spirits around her were waiting to be reborn. Now one thing I find interesting about this man’s story is that he said that while he was in what he called the void he was being offered choices in his reincarnation. So that got me thinking that maybe from time to time you might get to choose your next life. I don’t think that you would get to choose every time because who would want to come back to life in a place that it constantly surrounded by war and poverty. And if this is all true and reincarnation is real I don’t really like the idea of endless lee being brought back to earth. Eventually I would like to go to another planet or a higher plane of existence, kind of like that movie defending your life. Which is an amazing movie.

Now there are countless other reports coming from people from all over the world who have also died. And when they came back to life they described basically the same thing. And we also have tons of people who say that they have been reincarnated. And the amazing thing about a lot of these reincarnation cases is the fact that they can describe their past life in such great detail. And there is just no way that anybody can explain how they know what the know. The only obvious answer is that they have in fact been reincarnated. And I have covered a lot of these amazing stories in the past and I would highly recommended to go check those videos out because some those cases, well, there just mind-blowing!