In China there is a lake that is responsible for some very strange and terrifying disappearances and just out of this world paranormal mysteries. This lake is known by the locals as the waters of death or the place of death because so many ships and brave sailors have just disappeared over the centuries. One case that really brought this lake to my attention happened during World War 2 when the Japanese were invading China. On April 16, 1945, an enormous, 2,000 ton Japanese cargo vessel, along with about 200 troops, were making their way across the lake. And this ship was loaded with stolen treasure, precious artifacts and tons of loot. Then somehow it just sank, which was very odd as it was a perfectly clear day. Now not to long after this ship sank the Japanese Navy sent a salvage team of seven divers. And out of these seven divers only one returned. And when this lone diver came back to the surface it was pretty clear that he was terrified, he saw something that just scared the crap out of him, and he never told anyone about what happened to him or his team. And the Japanese Navy never did find their ship, or any remains of their crew or the other six Navy divers. 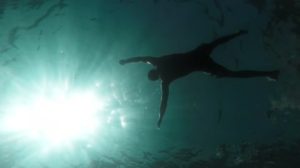 Now when the war ended the Chinese government tried to find and salvage this sunken ship in hopes of getting back some of their precious antiques and relics that had been stolen from them by the Japanese. So the Chinese hired an American salvage expert Edward Boer to find the wreckage. Now not only did this expert fail to find any signs of the lost ship after a full month of searching but he also reported that several of his divers died because they never came back to the surface. Now they say that this lake is only about 30 feet deep, and if that is true that makes this case just that much more bizarre. And many years later this American salvage expert, Edward came forward with his story, and it is out there. Edward stated that while he was diving with his team looking for this sunken ship he saw a very bright blinding light coming from the murky water below. And right after he saw this light he heard a very loud un godly like sound. And he and his team were now being pulled to the bottom of this lake by some unseen force. And Andrew claimed that while he was fighting for his life trying to resist being drowned he saw his other fellow divers just dissolve away into this strange glowing light that was coming from the depths of the lake, and they were never seen again.

Now throughout the 1960’s and 1980’s a total of 200 ships have mysteriously vanished here along with about 1,600 people. And these people and ships have never been seen again. Another very interesting case happened on August 3rd, 1985 when a total of 13 ships just vanished without a trace. And in this case a few people did manage to survive but they either had no memory of what happened or they went completely insane, because they were making no sense at all. Then again in 2010 a huge 1,000 ton vessel sank really close to the shore and still to this day nobody has ever been able to locate this huge ship. Now most of the time when theses ships and all these people just vanish it’s a perfectly clear day. And all theses search and rescue teams have never been able to find any of them, and there have been hundreds, maybe even thousands over the centuries. And this lake is said to be only 30 feet deep. Making me believe that maybe these ships did not sink, maybe they just vanished. Now there have been many researchers who have spent a lot of time trying to solve this mystery, and they all say that this should not be possible in such a shallow lake. And there have been many high-tech expeditions and they always come back empty-handed, only deepening this mystery. On researcher stated that giving the extremely high number of missing ships and due to the fact that nobody has ever been able to find them or any human remains is just unimaginable.

Another amazing case happened when another salvage diver trying to solve this mystery disappeared without a trace. Then about a day later his body was found but it was found in another lake that was miles away. And there is no connections what so ever between these 2 lakes. Then in 1977 three dams were built here and the largest of these dams was 2,000 feet long, 165 feet wide and about 50 feet high. Then one day it was gone, it just vanished, there wasn’t even one little scrap left behind. And it took the Chinese government months to build this huge dam then in one single day it just wasn’t there, and there wasn’t even one eye-witness. I mean how is that even possible. Now there are may theories in regards to all these vanishings, some say rogue tidal waves or maybe forming sandbars but none of these theories can explain why there is never any wreckage or any human remains found. So some believe that maybe an interdimensional portal is to blame. 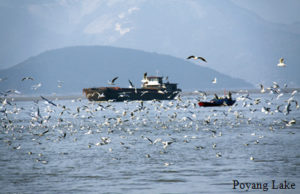 And to be honest even though there is no scientific proof of interdimensional portals it still makes a heck of a lot more sense then a rouge title wave or forming sandbars. And another thing that you have to take into account if you actually want to solve this mystery is what these few eye witnesses have described. Now most of them never talked about what they saw while they were swimming down in the depths of this lake, well at least no publicly, and many were said to have gone completely insane. But for those that have come forward they described something rather terrifying, a loud noise followed by a mysterious bright blinding light coming from the bottom of this lake. Then followed by a very strong force that was trying to suck them into the depths of the earth. And since no wreckage of any of these hundreds of ships that have gone missing has ever been found these eye witnesses must be describing exactly what is happening here at this lake. And I have no idea what could cause what they are describing. Could they have actually witnessed proof of an interdimensional portal opening up? Or maybe even an earth-bound black hole?

Now there are also tons of reports of UFO’s, USO’s and even lake monsters! Making this place just a huge paranormal hot spot. And I’m curious, what do you guys think is causing this? Do you think its something paranormal? Or do you think that maybe there could be a rational explanation for what is causing all these ships, sailors and even dams to just disappear? Please let me know you’re thoughts in the comments below.